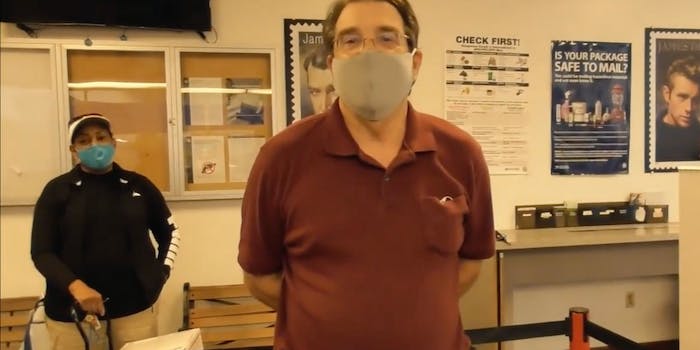 ‘That is factually and legally incorrect’: Woman shuts down anti-masker at the post office with simple logic

'You do not have the right to risk the safety or harm of others.'

A viral video shows an anti-masker in a post office using “freedom” as a defense for not wearing a mask—and immediately getting shut down by other people in line.

“That is not what freedom means,” a man standing directly behind the anti-masker says.

The video of the altercation, filmed by the anti-masker as he buys stamps, was shared on Reddit.

“I’m free to do whatever I please,” the anti-masker says in the video. A woman waiting in line with a bundle of packages quickly refutes his argument.

“Even though you’re saying you’re free to do anything, that is factually and legally incorrect, sir,” the woman says. “You can’t start a fire in here. You can’t run around naked. That’s why there are laws.”

Overlay text on the video says, “This lady is super annoying lol.” Redditors defended the woman and applauded her well-spoken argument.

“Damn, I love intelligent people putting idiots in check. Props to her for keeping cool too,” one user commented.

The woman lists examples of laws that exist to protect public safety, including traffic laws in school zones, and says wearing a mask is no different.

There was an average of 66,118 new cases of COVID-19 per day this week in the U.S., and the Center for Disease Control and Prevention still advises the public to wear a mask and socially distance, especially indoors.

The anti-masker responds, “His personal safety has nothing to do with me.” He points at the man standing behind him.

This particular comment by the anti-masker sparked anger among Reddit users who said it displayed a blatant disregard for others’ well-being.

“The amount of times I’ve heard something similar to that turns my stomach,” one user commented. “I was arguing with an anti-mask coworker a while back and his exact words during the argument were ‘I am not responsible for the germs that leave my body.’ I was dumb struck.”

The woman continues to use examples of other reasons one would be denied service in a post office.

The anti-masker leaves the post office after receiving his change as the man behind him says, “Liberty is not anarchy.”

“These people understand ‘No shirt, no shoes, no service,’” another user commented on Reddit. “But when a business requires a mask to enter, it’s all about ‘muh freedom.’”