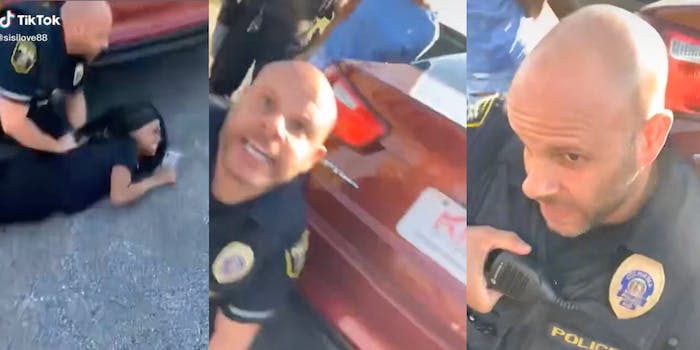 ‘That is not how you handle a child’: Video shows police officer slamming 14-year-old Black girl on ground at school

A viral video shows a Missouri police officer slamming a Black teenage girl on the ground and twisting her arm backward as she screams for help.

The video was shared by the victim’s mother on TikTok on Wednesday and has since been viewed more than 600,000 times.

Sierra Smith wrote on Facebook that the incident involving her 14-year-old daughter took place at the teen’s school in Columbia, Missouri. “The police cannot treat our kids this way,” Smith wrote.

The video, which is less than 15 seconds long, starts with the victim screaming while the officer holds down her arm with a knee on her back.

“Step back!” he yells at the person behind the camera. It wasn’t clear if Smith herself shot the video, and the Daily Dot has reached out to her for further information.

Meanwhile, the 14-year-old screams, “Don’t put your hands on me bitch… You’re going to jail, bitch.”

Some commenters tried to justify the officer’s actions and demanded “context” of the incident, claiming that the child should be taught “respect,” but many others pointed out that nothing would justify an officer behaving this way with a teenager.

“For the ppl (sic) saying respect how do you think the youth will respect when the first thing you do is show violence,” one user wrote.

“Regardless of how she acted, that is not how you handle a child,” another commenter wrote. “That is a grown man using unnecessary force.”

Some pointed out that it was easy to assume that the girl was in the wrong because of her race, giving in to stereotypes that often vilify Black girls and negatively impact their growth.

“Y’all really in the comments saying the kids in the wrong what if this was your child yall just assuming she did something wrong Bc she’s black,” one user wrote.

The Daily Dot reached out to the Columbia Police Department for comment.