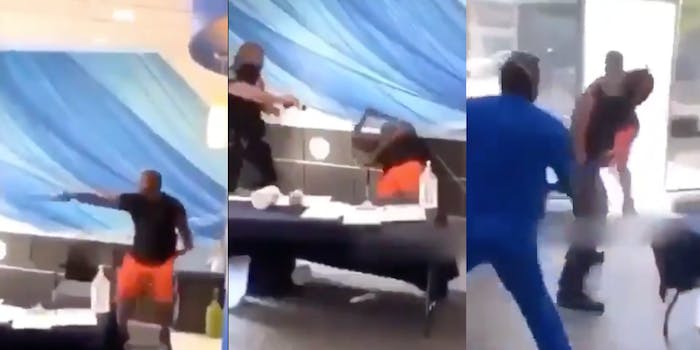 'The fact there's people with their phones out trying to film running after them bothers me.'

A video that went viral on Reddit on Thursday appears to show a man pretending to fall after being hit with a stun gun by a police officer before getting up and swinging a knife.

The video, which was uploaded to the Instagram account @policeposts, garnered speculation as to whether the individual was actually tased and whether either of the individuals sustained injuries.

When the officer is directly next to the individual, he gets back on his feet and swings the knife, hitting the officer over the head multiple times.

As the individual hits the officer, a group of bystanders record and have audible reactions to the encounter.

The individual eventually stops hitting the officer and runs away. The officer chases after him.

The post’s caption compared “intermediate weapons” to knives and said, “distance is key.” Police have been criticized in recent months for using weapons like stun guns and rubber bullets against Black Lives Matter protesters.

“Tasers are a great option however they aren’t always effective,” the post said. “Remember that de-escalation is always the goal but not always the answer to the situation.”

The Dekalb County Police Department did not immediately respond to the Daily Dot’s request for comment.

Some tweeted that they didn’t like how people just stood by and recorded.

One Twitter user wrote, “We’re going down the drains at an alarming pace.”