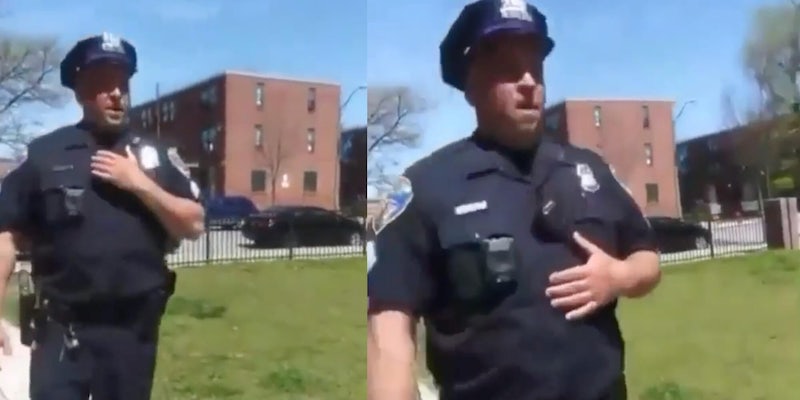 He is now under investigation.

An investigation was opened into the allegation that a police officer intentionally coughed on residents of a public housing complex after a video of the incident went viral.

The video, which has been circulating on social media, was filmed by a woman who can be heard telling an approaching officer, “Hey officer friendly with the cherry cheeks.”

As he walks past the woman and other residents, he appears to force himself to cough, without covering his mouth. The CDC urges people to cover their mouths when coughing or sneezing with a tissue or the inside of their elbow.

The woman, along with the other residents began yelling at him.

“I should call the CDC on his ass and let them know he just did some dirty ass shit like that,” says the woman filming.

The incident occurred outside of the Perkins Homes in Southeast Baltimore, according to the Daily Mail.

The Baltimore Police Department told the Daily Dot via a statement that it has reviewed the video as well as the officer’s bodycam footage and is continuing to investigate the incident.

“After watching the full video, [in] its entirety, it is not only disturbing, but incomprehensible, especially considering the high-level of strong and clear guidance that we have provided from the beginning, regarding COVID-19,” Baltimore Police Commissioner Michael Harrison said. “Members are always expected to be sensitive and professional to the community, but what we saw in the video is alarming because this pandemic is affecting lives not only nationally, worldwide, but right here in our own police department.”

Twelve Baltimore police officers have confirmed cases of COVID-19, and 115 are quarantined as of Tuesday, according to the Baltimore Sun.

In the video, the woman claims that Black people do not get coronavirus, which is untrue.

Reports have shown that COVID-19 is disproportionately affecting Black Americans. Issues such as underlying health conditions, lack of job security, and less access to healthcare are more common among Black communities nationwide.