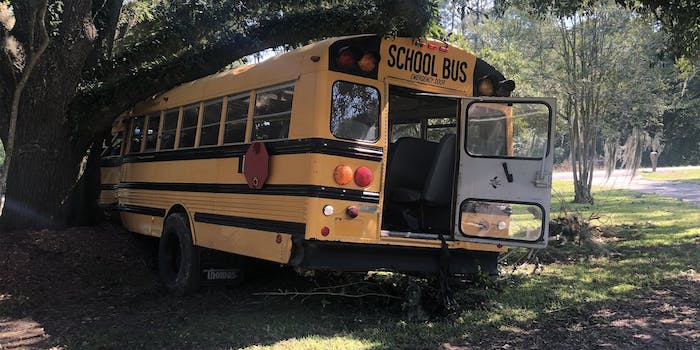 The child reportedly flipped his middle finger at police officers.

An 11-year-old was taken into custody on Sunday after police said the boy stole a school bus for a joy ride and later crashed it into a tree. A video shared to Reddit shows officers pursuing the boy on a high-speed pursuit in Baton Rouge, Louisiana, and photos show the boy being taken into custody.

According to WBRZ, authorities said the bus belongs to a private owner subcontracted with a local kindergarten and was stolen from around 11am. After police became aware of the theft, a chase ensued. The school bus was ultimately crashed, hitting a gas line and getting stuck in a tree.

The boy was taken into custody after police surrounded the bus. There were no reported injuries or significant damage.

On Monday, Baton Rouge police said they believe the child was too small to reach the vehicle’s pedals and stood up to operate the school bus, which had a push-start button. Police added that the 11-year-old also flipped his middle finger at officers as he passed them.

This event is not the first time this year that a child has managed to take hold of a vehicle. In May, a 5-year-old boy in Utah took his parents’ car onto the highway. The child said he was on his way to California to purchase a Lamborghini.