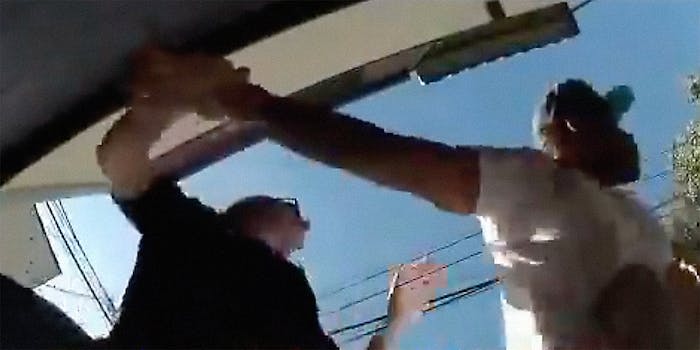 ‘I don’t know who I am looking for yet’: Police arrest Black man while searching for white suspect

A judge ruled to release the 2019 bodycam footage.

The Los Angeles Police Department released a video on Friday taken from a body camera that shows officers arresting a Black man while responding to reports of domestic violence. The alleged suspect was a white male.

The video, which was in police custody since the incident happened in May 2019, was released to the public when a judge ruled in favor of Antone Austin, the man mistakenly arrested for domestic violence, according to the Los Angeles Times.

Austin, a music producer also called Tone Stackz, hired an attorney to prosecute the case of his arrest against the LAPD in “a lawsuit alleging racial profiling and civil rights violations,” the article stated.

The police department argued the video “may have a chilling effect on future LAPD investigations” in a court filing from the Los Angeles city attorney’s office.

The 2-minute clip of the police footage, which was later posted to Twitter on Friday by user @Jasmyne, shows officers spot Austin outside of his house and assume he is the suspect in question for domestic violence.

In the tweet, Jasmyne Cannick writes, “Hey fam, I have an update on a story. Remember the Black man who was bringing in his trash can when the #LAPD kidnapped him after a white woman called 911 on her white boyfriend? Today a judge removed the protective order on the video the LAPD didn’t want you to see.”

“Is this the dude?” one officer asks as the police car drives slowly through the neighborhood.

“Probably,” the other officer responds.

Following the short conversation between the officers, the car parks. Both officers exit the vehicle and ask Austin to turn around.

“What are you doing, bro? I live here,” Austin says, putting his hands over his head.

The officers appear to get more agitaged as Austin asks questions. One officer grabs him while the other pushes him with handcuffs.

“What is your problem, dude?” the officer asks as Austin appears confused.

The officers then work together to put Austin in handcuffs. “What are you doing, man?” one of the officers asks him. “Get against the wall.”

“Look at what you are doing to me,” Austin says as he is pushed against the garage door of his house. He begins banging against the wall and yelling for his girlfriend Michelle Michlewicz, who is inside.

The police officers attempt to handcuff Austin while he is pushed against the garage door of his house and tell him to relax.

The body camera footage continues as Austin tries to break away from the officers grasp and yells for help.

Michlewicz approaches outside and tells the officers to stop. As the altercation escalates, the camera shifts, and the picture goes in and out.

The officers yell over Austin’s cries for help as Michlewicz briefly appears naked on camera. She attempts to wrap herself in a bathrobe while asking repeatedly, “What is happening?”

“What are you doing?” Michlewicz yells as more people begin to arrive around the scene to answer Austin’s calls for help and ask why the police are trying to arrest him.

Michlewicz begins to push the officers as they respond that they are trying to arrest Austin. “For what?” she says. “What are you taking him in for? Why are you doing this?”

“Get on the floor,” one of the officers says.

The clip ends with Austin being pulled to the ground by the police as sirens can be heard approaching nearby.

The video, which has 96,600 views, 2,118 likes, and 1,301 retweets, upset Twitter users who said it was another instance of police officers making decisions based on prejudice and exercising undue power.

“So… #LAPD arrested this man because they felt like it?” one user commented.

“Without lawful reason to detain him it’s just kidnapping. They should be in jail,” another user wrote.

@Jasmyne posted another video that contains more of the footage, including a clip of the officers telling Austin to relax while someone yells, “He’s Black.”

In the second clip, the camera is positioned on the ground and captures only the top of the house and a few of the officers standing nearby.

In the background, Michlewicz yells, “You have the wrong guy.” The surrounding chatter increases as neighbors approach the scene.

According to the Los Angeles Times, Austin and Michlewicz were arrested for resisting the police. In their attempts to constrain the couple, the officers slammed Austin’s head into a wall while Michlewicz was tackled to the ground, leaving the couple bloodied.

The Los Angeles city attorney’s office did not immediately respond to the Daily Dot’s request for comment.