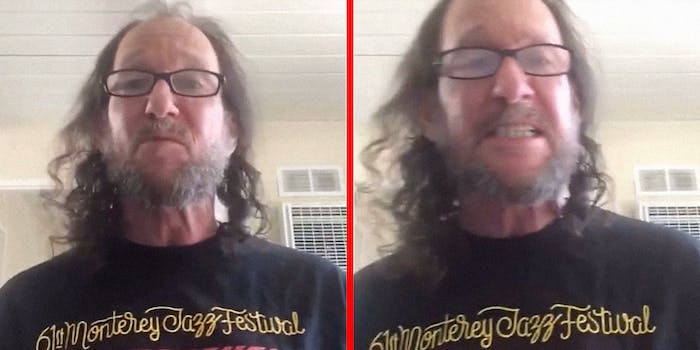 'The whole f*cking internet is a godd*amn popularity contest.'

In a video released on Reddit Thursday morning, a jazz musician goes into a fit of rage over the end of Periscope and the state of social media as a popularity contest.

In his recorded reaction to the end of Periscope, a live streaming platform owned by Twitter since 2015, the musician is frustrated by the platform’s decline and issues connecting with viewers on live stream.

“The whole fucking internet is a goddamn popularity contest. I can’t win that. I’m fucking 60 years old,” the musician says. “There’s no goddamn way I played better than everybody. I got 10 fucking viewers on Reddit, down votes.”

In the video, which was posted to the Public Freakout subreddit and has over 250 upvotes, the musician cusses and yells into his phone repeatedly about his issues with Periscope, although he doesn’t name the platform directly.

More than 40 redditors left comments, many of which dripped with sarcasm and mockery. But one user said they recognized the ranter.

Some speculated about who the artist is, and many felt he sincerely addressed the difficulty of reaching a large audience and have your voice heard on the internet.

“The voice of my generation. The millennial,” one user commented.

“That’s a milleniold my dude,” another user responded.

In the latter half of the video, the musician criticizes Periscope’s approach to categorizing musicians and says it limits creators to fit into specific boxes and attract fewer viewers to their live streams.

Periscope, which was once the most popular platform for live streaming, became less widely after other social media platforms like Instagram offered their own live streaming services.

On Wednesday, Periscope tweeted to announce the company’s final day on the app store, and many Twitter users responded in an outcry of support.

The tweet, which received 1,200 retweets and 2,300 likes, caused many to reflect on the impact of the live streaming service and their fondness for the app.

“We want periscope back, how many memories created on that wondrous app. Pleasee would it be possible for us to get it back?” one user tweeted.

Others thanked the platform for creating a space to meet people from around the world and leading the way for live streaming apps.

“It has been an amazing journey! So many memories and friends made. Thanks for the platform!” another user commented.

Periscope’s shutdown seemed inevitable, and many users felt the platform was mismanaged and difficult to use. The musician’s reaction was also mimicked on Twitter as some felt Periscope had continued to let them down during the past few years.

“It was an exciting first 3 years. The last 3 were bittersweet. Losing passion for the community really stung,” one user wrote.

Other users were confused about Twitter’s decision to shut down Periscope and turned to Twitter Support in search of answers. The account said Twitter will focus instead on improving live video features directly on its platform.