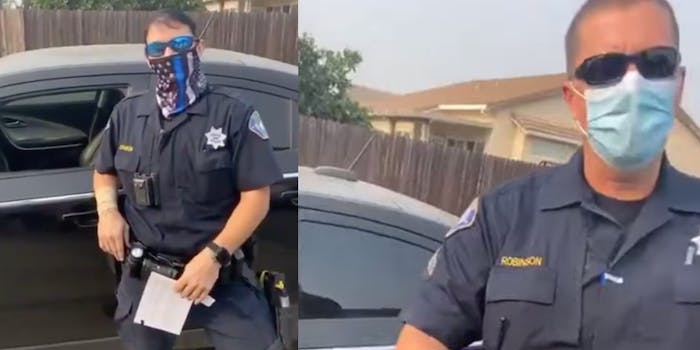 ‘We will happily take the ticket, but I will not allow my son to stand here ... with your hand on your gun.’

A Black mother recorded herself defending her son against a police officer in California so that he wouldn’t become “the next hashtag.”

Civil rights advocate and lawyer Ben Crump posted a snippet of the video to Twitter on Tuesday, which has since received more than 247,000 views. “Cops need to DE-ESCALATE situations & treat POC with respect we all deserve!” he wrote in the post.

A longer, 22-minute-long version of the video was posted to YouTube, and it showed the woman and her family’s interaction with three Elk Grove Police Department officers.

“My son will not become a hashtag!” the woman is heard repeatedly saying to the officer. The white female officer was dubbed a “Karen cop” by the “FuckYouKaren” subreddit. Throughout the ordeal, the officer remains standing with her hand on her gun, refusing to answer any questions by the mother.

Through details shared later in the video, it appears that her son, a 19-year-old student who is currently pursuing his master’s degree, was pulled over for an alleged traffic violation and pulled over at their home.

The officer pulled him over, and the mother said she asked him to immediately have his paperwork—including license, insurance, and registration—ready so that if he were fatally shot by police, they couldn’t say he was “reaching for a weapon.”

“No, he looked like he on probation or parole because he a fucking Black man!” the mother says to the officer.

“She refuses to give him a ticket, but he is detained, and she’s just standing there,” the mother says on camera, adding that the officer instead called for backup.

“Give him a ticket,” the mother says. “My son will not be another one of y’all’s hashtags.”

The officer remains in her spot, maintaining her silence.

“Can you contact your supervisor?” the mother asks her.

“Hello? Officer Johnson?” the mother asks again. “Can you contact your supervisor?”

The officer’s answer is inaudible, but in the conversation that follows, it appears that she already has contacted her supervisor.

The mother then calls 911 to report the officer.

“We’re at our residence, and she’s holding us hostage right now, we are in fear for our lives,” the mother says.

“Why?” the dispatcher says.

“Because the cop has her hand on her gun,” the mother responds.

At this point, another female officer arrives at the scene, and the mother asks her why the first officer wouldn’t write the ticket so that they could all “move on.”

The newly arrived officer tries to explain something, though it’s inaudible in the video, before being joined by a male officer in a face mask.

The male officers calls it “not an ordinary interaction,” while the second female officer calls it a “safety issue.”

“She’s the only one with a gun ma’am,” the mother says.

“We are no threat to her. She is the only one with weapons,” the mother reiterates.

When the mother exasperatedly says that all she wants is for the officer to issue a ticket so they can go back into the house, the male officer accuses her of “screaming.”

The officer then walks off and, according to the mother, instructs one of the other officers to watch the family.

The mother identified two of the officers in the video, however, the Daily Dot was not able to independently verify this information. The Daily Dot has reached out to the Elk Grove Police Department.