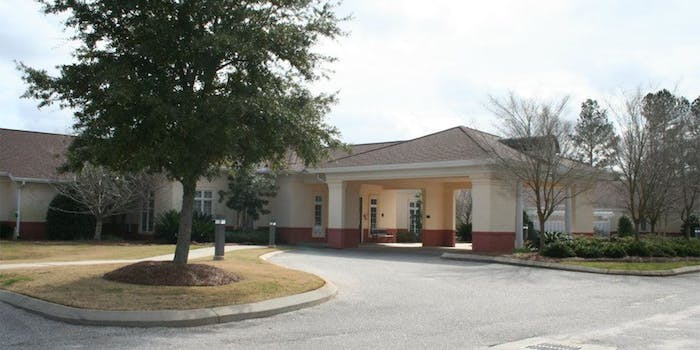 It was scrubbed from social media.

The video, shot from the Brennity at Daphne assisted living facility, shows a recently deceased older woman lying under a blanket, her blue blouse decorated with little hearts and other designs. It appears to show a female employee in scrubs laughing in the dead woman’s face, poking her body, and opening and poking her eye.

The former employee also was shown incorrectly wearing her mask around her one ear. Details of the elderly woman’s death are unknown.

It was posted directly to the internet and social media, according to WKRG News 5, though it appears to have been scrubbed from the web.

Erin Thompson, executive director of the Brennity, responded in a statement that “we can confirm that this video was recorded by one of our associates at The Brennity at Daphne. First and foremost, we find the actions in this video to be completely unacceptable, inappropriate and not in line with our Resident First philosophy that we strictly uphold at our communities.”

“We can confirm that this associate is no longer with Sagora Senior Living as we will not tolerate behavior like this,” the statement continues. “We are working closely with investigators and local authorities as they handle the situation. We offer our thoughts and prayers to the family members and loved ones of this resident. We believe that this story is not a matter of public interest, and out of respect to this resident’s family, we ask for privacy during this sensitive time.”

WKRG reached out to Daphne police. Thompson told the station, “we are working closely with investigators and local authorities as they handle the situation.”