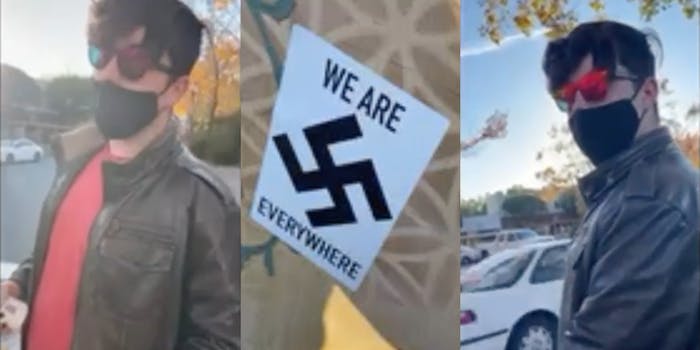 The man could face both hate crime and vandalism charges over the incident.

An unidentified man was confronted in a now-viral video after getting caught putting up Nazi stickers in a California town.

The video, posted online by Instagram user Noah Mohan this week, shows stickers on the streets of Fairfax that include a swastika and the phrase “We Are Everywhere.”

Mohan states in a description of the video that he opted to tear down the sticker before confronting the man responsible down the street.

“I tore the sticker off, threw it away, and followed the guy down the street with my phone for about 20 minutes telling him to get the fuck out of my town and to throw that racist shit away on the way out,” Mohan said. “He was wearing sunglasses that had a nazi SS on them and had a nazi pin on his jacket.”

When asked why he was placing Nazi stickers in Fairfax, the man responded by defending his actions.

“Because I stand by that ideology,” the man said.

Throughout the nearly 10-minute-long video, Mohan can be seen pulling down numerous stickers while following the man.

“You can keep putting them up, bro, I’mma keep ripping them off,” Mohan said.

After a back and forth for several minutes, another individual approaches and asks the man whether he has ever visited the notorious Nazi concentration camp known as Auschwitz.

“I don’t believe it is real,” the man replies.

The video eventually ends when the police arrive on the scene and begin talking to the man.

Fairfax Police Chief Christopher Morin later told the Marin Independent Journal that the man, who also happened to be carrying a knife, was briefly detained and then released.

“It was a standard pocket knife that anyone can possess,” Morin said. “The reason we took that information in is because residents on Nextdoor are alleging a weapon was involved and that the suspect brandished a knife. So we needed to quell that rumor.”

Morin added that the man could now be facing both hate crime and vandalism charges over the incident.

“Officers have completed their follow-up investigation and will be sending the reports to the district attorney’s office for review of charges against this person for the posting of these inflammatory hate-related stickers,” Morin said.

Mohan also encouraged other people in his post to stand up to racists as well if the opportunity arises.