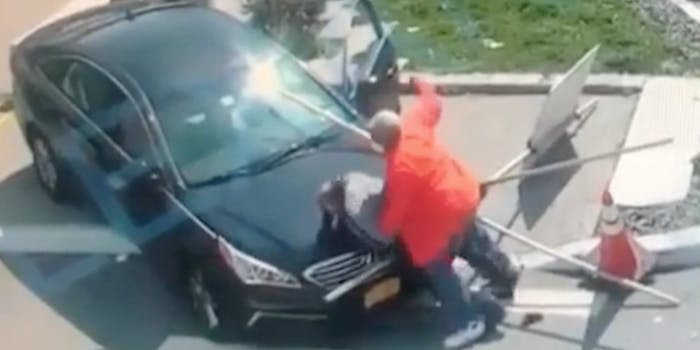 Bystanders reportedly stopped trying to intervene after learning the full details of what transpired.

A woman was allegedly fatally shot by a man in broad daylight in New York on Wednesday. The woman’s boyfriend, who witnessed the incident, allegedly rammed into the suspect as he was attempting to flee via his bicycle, according to the New York Daily News.

Her killing and the subsequent attack that her boyfriend, Dwayne Walker, 58, allegedly carried out against Reyes were both captured on a surveillance video, which was first obtained by the Daily News. In the video, a woman, believed to be Mass, is sitting on the sidewalk as a man, believed to be Reyes, approaches her after setting his bike down. She can be seen getting up off the sidewalk and trying to run away from him. That’s when Reyes allegedly shot Mass six times. In the video, she can be seen falling to the ground.

The suspect gets back on his bike and allegedly tries to flee the scene. That’s when a person, believed to be Walker, can be seen ramming into Reyes while in a Hyundai, flinging Reyes into the air. Walker then gets out of the vehicle, grabs Reyes, throws him onto the hood of the car, and repeatedly punches him.

Bystanders eventually tried to intervene but stopped once learning the full details of what transpired, according to Mass’ brother, Raul Mass, who spoke with the Daily News. “One of (Mass’) co-workers came running, saying ‘No, no, no, he shot his girlfriend, he’s defending his girlfriend!’” he said. “So they backed away, and then the cops came, and grabbed both of them.”

In the video, Walker can then be seen rushing over to where his girlfriend is and trying to help her.

“Upon arrival, responding officers encountered an unconscious and unresponsive 52-year-old female with multiple gunshot wounds to the body and a conscious 66-year-old male with trauma to the body,” the NYPD said in the statement.

Mass was “pronounced deceased” at a local hospital, police added.

“She was beautiful. She was everybody’s person, everybody’s friend,” Walker told the Daily News. “She was the one at the party who got everybody dancing. … Everywhere she went, she drew a crowd.”

He added that she “befriended” Reyes and that Reyes “would bring her lunch sometimes.”

Mass eventually introduced her boyfriend to Reyes that Wednesday, and, according to Mass’ brother, Raul Mass, he was taken aback by the apparent revelation. “I think he didn’t know she had a boyfriend,” Raul Mass told the Daily News.

While police believe Reyes may have wanted to pursue a romantic relationship with Mass, according to WPIX, a motive remains unclear. The NYPD told the Daily Dot that Reyes is “in custody at the hospital and is listed in stable condition.” He was arrested and charged with second-degree murder, manslaughter, criminal use of a firearm, and criminal possession of a weapon on Thursday, police confirmed with the Daily Dot.

Walker has reportedly not been charged. The NYPD added that the investigation into the incident is “ongoing.”