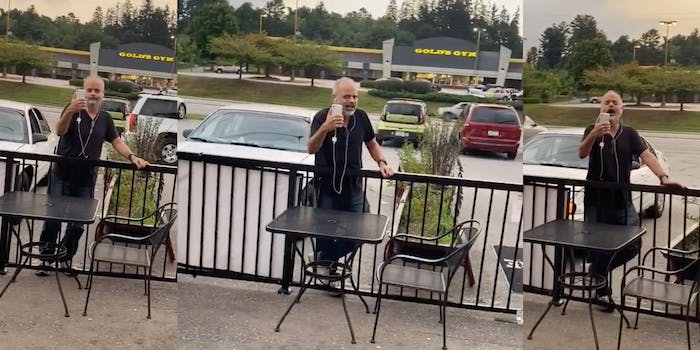 A restaurant employee said he was 'screaming with food in his mouth.'

A Grubhub delivery driver has been terminated after a video surfaced showing him verbally attacking a North Carolina restaurant worker and calling her a “power tripping Nazi” for asking him to wear a mask.

In a video posted on Facebook on Thursday by the employee, Mary Taylor, the driver is seen yelling outside the entrance of Bonfire Barbecue restaurant in Ashville, North Carolina.

Taylor named the man in his post, but Grubhub did not confirm the identity of the driver to the Daily Dot. On the subreddit r/PublicFreakout, the man was dubbed a male “Karen,” or a “Ken.”

Taylor said in her post that he was eating a Burger King sandwich when he approached her “window” at the restaurant.

“I asked him where is mask was, he got extremely aggressive and started screaming with food in his mouth spitting food all over the place,” she wrote in the post. “I asked him to get back in his car and wait for the order. What this video shows is his third time being asked to wait in his car.”

“All you have to do is get me the food,” Gonzales says at the beginning of the video.

“Get in your car and we’ll get you the food,” Taylore responds from behind the camera.

He is seen with his phone held up, seemingly recording the incident as well.

“You’re on a power trip,” he says repeatedly. “Just give me the food and I’m out of here.”

“I’m not gonna give you the order, I’m cancelling the order,” she responds. “Sir, this is the store policy.”

When she asks if he can read the sign outside the restaurant, he responds that as per the constitution, the restaurant has “nor right to enforce any of this.”

She reminds him that the restaurant is on private property.

“Your customer is waiting for the food,” he says a bit later.

“I called the customers [inaudible],” Taylore responds, “and said you were eating, spitting food.”

“I was not spitting food, I was talking, something spilled out of my mouth,” he says. “You wanna exaggerate something, go ahead. That’s the only way you win, by exaggerating, by lying.”

At this point, Taylor starts to end the conversation and walk away.

We don’t need your business sir,” she responds. “All right, thank you!”

“You’re not gonna lecture me, tell me what to do!” he says. “I used to do what you do and I make more now because of what you’re doing. I make the tips you don’t make now because you’re so disrespectful to your customers.”

Since the video was posted, it has received 15,000 views.

In a statement to the Daily Dot, a Grubhub spokesperson confirmed that the driver was initially suspended and then terminated.

“We require that drivers wear a mask while picking up and making deliveries, and have zero tolerance for misconduct,” they said. “We provide drivers with guidance from the CDC to practice good hygiene and follow local rules and regulations when interacting with diners and restaurants, and allow drivers access to free PPE, including masks and hand sanitizer.”

Following the incident, Bonfire Barbecue’s manager expressed support for his employee and said the restaurant is temporarily suspending its work with Grubhub, according to ABC13News.

“Unfortunately, the people that don’t agree with it feel like they can speak to our employees anyway they want,” restaurant manager Geo Rocabado told ABC13News. “We’ve all been through hell, and that doesn’t negate our employees. They deserve respect.”