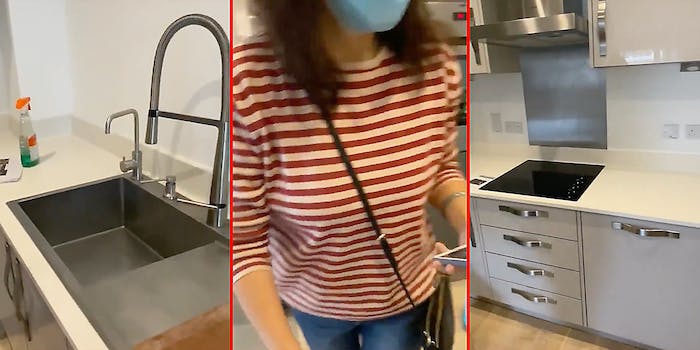 ‘Everything is immaculate’: Video shows landlord complaining that spotless apartment is ‘filthy’

The landlord allegedly tried to charge a cleaning fee.

A viral Twitter video shows a landlord put on blast for misrepresenting a tenant’s “absolutely spotless flat” as
“filthy.” The video sparked a discussion on renters’ rights against predatory landlords.

User @voteforhani tweeted a 20-second video of her landlord investigating her apartment kitchen and apparently criticizing the cleanliness. In the video, the cabinets, counters, and sink appear to be clean. The video has over 360,000 views.

“I hate landlords,” the tenant wrote. “Please watch as mine pretends our absolutely spotless flat is filthy.”

“When you do something, I just zoom in,” the tenant responds, clearly refuting that the kitchen is dirty at all.

“All the surfaces need to be cleaned,” the landlord, pointing at what looks like spotless counters and electric stove. Apparently, the landlord tried to charge the tenants for cleaning charges.

“Everything is immaculate and in full working order!” the tenant tweeted with another video showing a clean, empty bedroom and kitchen. “And she had the nerve to say she needs to deduct fees for the place not being clean! who do I write to?!”

“But last month she was asking if we could extend our contract,” the user wrote, “because she didn’t think she would find tenants to keep it as tidy as us.”

Commenters shared their own horror stories of moving in and out of various apartments, including accounts of bug infestations and landlords attempting to railroad tenants with unnecessary charges. User @professorscaIIy provided some advice to help avoid cleaning and maintenance charges upon move-out.

“I’m sure you probably did already but for those who don’t, *always* take your own pictures of a rented property when you move in,” the user wrote. “Saved me getting ripped off by landlords who hadn’t a leg to stand on a bunch of times.”

The Daily Dot reached out to @voteforhani for further comment.