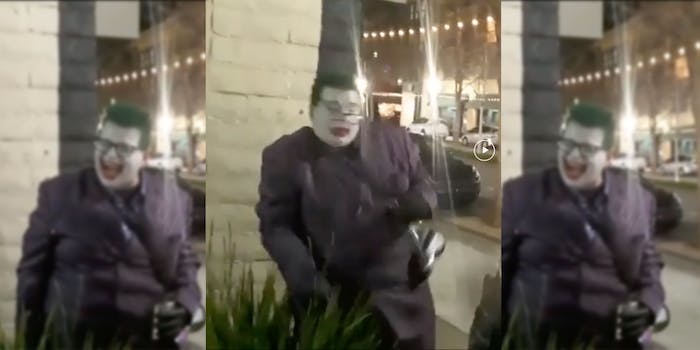 A recent video uploaded to the r/PublicFreakout subreddit shows justice served by a bystander who threw a loaf of bread at a Joker cosplayer who was using homophobic slurs.

Uploaded on Wednesday, the video shows the man dressed up as the popular DC Comics villain standing on a street corner and arguing with someone off-camera.

“What the fuck is in your mouth? Is that a grill?” the cosplayer asks. “You look like a faggot, dude.” The cosplayer then laughs maniacally, possibly in an attempt to mimic the Joker’s own famous laugh.

“I mean hey, if you’re against me being gay, deal with it,” the person behind the camera says.

“Oh, I’m not, but you are a faggot,” the cosplayer responds in a matter-of-fact tone, grasping a flask.

It becomes clear the two know each other as they discuss being friends and having previously gone to see the Joker film together.

The situation becomes even more chaotic as others, who might also be familiar with the cosplayer, start yelling at him. One person wearing a Carhartt sweatshirt urges the cosplayer to “Mace” him.

The comments under the video noted that someone plays a banjo-sounding instrument in the background as the chaos unfolds.

Seemingly out of nowhere, a man selling loaves of bread appears and offers each person a loaf. After everyone in the group declines, one man among the group takes a loaf and chucks it at the Joker cosplayer’s face.

A burst of laughter erupts from the small crowd, and the cosplayer retaliates by apparently trying to pepper spray the bread slinger. The two run after each other off-camera.

He’s no Heath Ledger, but the cosplayer sure put on an upsetting performance.