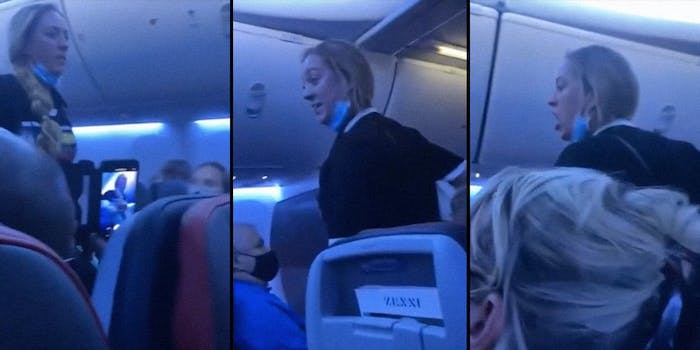 She shouted slurs at passengers.

Video taken by passengers on a Dallas-bound flight shows a woman wearing a mask under her chin and shouting homophobic statements as she and her travel companions are removed from the plane.

The footage consists of two Snapchat videos that were sandwiched together and shared on YouTube on Monday. In the clips, a blonde woman shouts “fucking faggots’ at other passengers and says, “You corrupted Disney.”

She rants that children seeing same-gender relationships are exposing to sex, a homophobic claim that sexualizes everything LGBTQ people do.

Passengers object to the woman’s statements: One man shouts, “No one wants to hear your bigotry.” Others demand that she “get off the plane.” A woman shouts that she’s a married lesbian who “fought for this country.”

The woman and her travel companions are already in the process of being removed from the plane when the footage starts, but she turns back to shout and argue with the passengers who defended the LGBTQ community. The footage ends with who appears to be a flight attendant taking the woman’s arm and dragging her off the plane as other passengers applaud.

Commenters on the YouTube video and on Reddit say the incident took place on an American Airlines flight and that the woman in the video is a business owner. Commenters on Facebook already started review bombing the woman’s alleged business page.

Update 10:30am CT, July 22: When reached for comment, American Airlines confirmed with the Daily Dot that the incident occurred on one of its flights. “Before departure on June 12, American Airlines flight 462 with service from Orlando (MCO) to Dallas Fort Worth (DFW) returned to the gate at MCO after a group of passengers refused to comply with the federal mask mandate and became verbally abusive to team members and other customers. Law enforcement met the flight at the gate and the disruptive customers exited the aircraft,” it said in a statement.

“We expect our customers to comply with our policies when they choose to travel with us, and we take action when that is not the case,” the statement continued. “Harassment of any kind will not be tolerated and we thank our team members for their professionalism.”

The Daily Dot has reached out to the woman allegedly identified as the subject of the video.