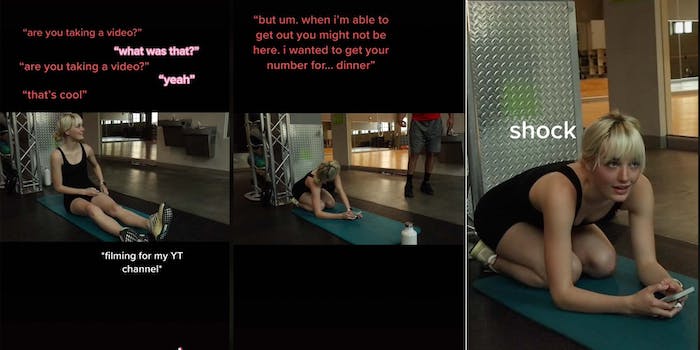 ‘Oh yeah? Well I’m too rich’: Man gets butt-hurt when TikToker says she’s ‘too young’ to go out with him

The middle-aged man asked for her number at the gym.

In a viral TikTok posted on Sunday, a middle-aged man asks YouTuber and model Avrey Ovard, 19, to dinner at the gym. Ovard says that she’s “too young” for him, and he responds by saying he’s “too rich” for her.

In the video, Ovard’s overlay text estimates that the man is in his 40s and shows him approaching her to ask whether she’s filming a video. She confirms that he is, and he leaves for five minutes before returning to ask her name. He explains that he’s in physical therapy for an injury and then asks Ovard out.

“When I’m able to get out [of physical therapy] you might not be here,” the man says. “I wanted to get your number for … dinner.”

The video received over 1.4 million views within one day.

Ovard added the caption “LEAVE WOMEN ALONE,” reiterating the sentiment of women who say they don’t want to be stared at or photographed when working out at a public gym.

Commenters on the video applauded Ovard for telling the man that she is “too young” for him—and roasted the man for not being able to handle Ovard’s rejection.

“The fact that you’re likely richer than him,” pointed out another user.

Ovard included footage from the TikTok in her most recent YouTube video, and commenters noticed her discomfort when the man approached her.

“When the man came, she started to put her short a little down to the knees and you know maybe it was just coincidence,” wrote YouTube user Yazmín Q. “But I realized that I find myself and other friends doing the same thing… LIKE IT IS OUR FAULT when clearly it isn’t.”