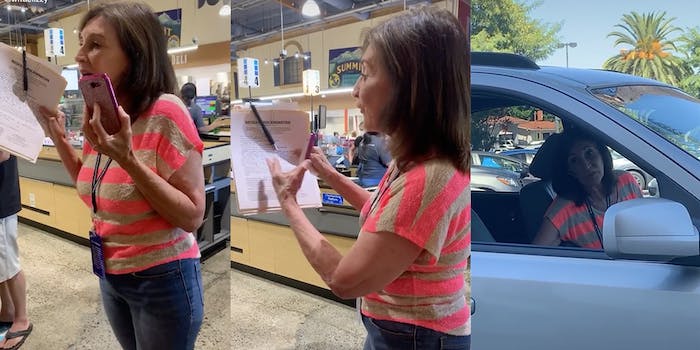 A TikTok video that gained traction on Reddit this week shows a woman dubbed a “Karen” serving a “notice of discrimination” to grocery store employees after being refused service because she wasn’t wearing a mask.

The video, which was first uploaded in August, shows the woman claiming employees’ refusal to serve her was “against the law.”

The video begins as the woman is seen holding her phone in one hand and a stack of papers in the other while she argues with a cashier at Mother’s Market and Kitchen. “It’s against the law,” the woman says. “I’m gonna leave because I don’t want to buy anything… I’m here to serve Janet.”

“So you’re not here to do business?” the cashier asks, to which the woman responds, “Yes, I was, but I’m not gonna buy anything.”

“We have refused service. You are trespassing, this is a private business,” the cashier says.

“OK, I’ve got you all on video and you can have me on video, as well, because I know the law, and you don’t,” the woman says.

Store employees continue to ask the woman to leave while she insists that she won’t exit the premises until she has successfully delivered an alleged legal notice to a store manager.

According to user comments on Reddit, the “notice of discrimination” obtained by the woman and seen in the video came from the conservative, pro-Trump organization The Healthy American, which advocates for “God-given rights.” The organization, which didn’t immediately respond to the Daily Dot’s request for comment, says on its website that it’s “a resource for those who want to take action to standing against tyranny.”

The organization’s website provides a downloadable “notice of discrimination” document for anti-maskers with a step-by-step guide on how to file a complaint against businesses requiring masks. The woman claims the notice was provided by the Department of Justice, but the document only states that the Department of Justice is “is required to investigate complaints of discrimination.”

In a later video shared to TikTok, the same woman is seen in her car continuing to berate a store employee before making her way out of the parking lot. “She’s coming back to serve me and my co-worker. I’m tired y’all,” the video’s caption says.

The TikTok user who originally uploaded the video also posted a play-by-play commentary to the incident to explain the backstory of the confrontation. She says that the woman only returned to serve papers after being told to leave due to her lack of a mask and that the woman wasn’t actually recording the incident at all.

“Wasting her time just arguing with us,” the user says. “She did end up leaving if you watch part two, but she says she will come back for us.”

The TikTok user and Mother’s Market and Kitchen did not immediately respond to the Daily Dot’s requests for comment.