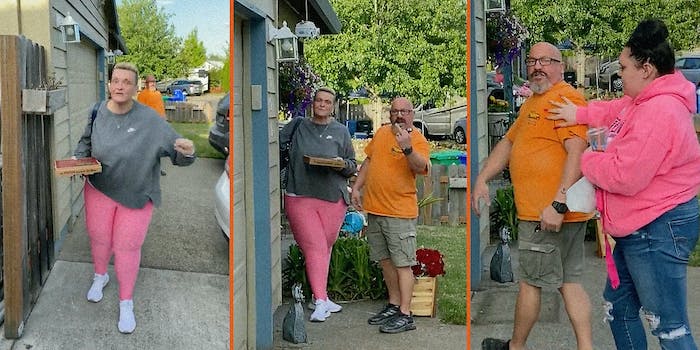 ‘Go back to the Philippines’: Video shows white couple yelling N-word at man from Philippines

'This is going online.'

A viral video shows a white woman dressed in bright colors yelling the N-word and telling the person filming to “go back to the Philippines.” Some commenters criticized the tweeted video for lack of context, while others asserted that no context would justify racist comments.

The video was posted on Thursday by Twitter user @davenewworld_2, who’s known for sharing videos of viral incidents. The clip shows an antagonistic argument between unknown parties in Oregon already in progress.

A woman with short blonde hair and pink leggings yells at the person filming to “go back to the Philippines” and follows it up with the N-word.

The racist woman says, “He lied about his mom. You know what, you little bitch? Are you recording me?”

The parties briefly go back and forth about whether the person filming is allowed to do so without the woman’s permission. (Oregon law says you can record people, via audio or video, as long as they understand they are being recorded, as she did acknowledge.)

“This is Oregon. Maybe you should go back to the Philippines, where you belong,” the white woman tells the people behind the camera, who remain unseen throughout the video. They mock her, and she goes right to the pit of the well.

She says the N-word multiple times while backing up.

“This is going online,” the videographer says.

“I think you guys just wanna say the N-word,” says the videographer.

A white man in an orange shirt then puts in his raggedy two cents, puffed up and offering absolutely nothing. “This house is paid for,” he says, “What about yours?”

Then, the man the bright Karen calls a “white [N-word]” presumably because of his olive skin tone, tries to distance himself from her and says something about “having respect.”

On Twitter, some commenters accused the videographer of “antagonizing” the racist white woman and the orange-shirted gentlemen to “get their worst responses.” The comment essentially excuses the couple for their behavior, suggesting they were forced into overt, casual racism with context not seen on camera.

“Steven Spielberg called in sick so this cameraman is all we had on short notice,” @davenewworld_2 replied with snark to one user. “Had I known someone of your prominence would be screening the footage, I would’ve asked the racist to start the argument over so you can get the entire context and feel better about judging them.”