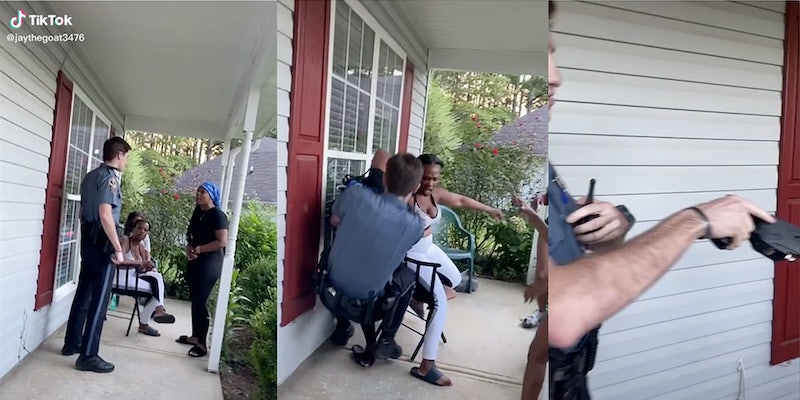 'You're on our property. We did not call you.'

A recent TikTok showing a Georgia officer tasing a Black woman on her front porch has now gone viral. The video depicting this week’s altercation has been viewed more than 14 million times and shared upward of 215,000 times.

The video allegedly begins just after the officer approaches a group of Black women on their porch. According to the Root, the officer threatened to arrest one of the women, 22-year-old Kyndesia Smith, after warning that she was speaking too loudly.

“We can talk if we want to, I’m not going nowhere,” she can be heard saying in the video. “It doesn’t matter. You’re on our property. We did not call you,” she continues, moments before the situation escalates and the officer grabs Smith, struggling to detain her. He eventually pulls out his stun gun after telling the woman to get on the ground, and shortly after fires it at her arm.

According to an AJC report, the Gwinnett County officer now identified as M. Oxford was responding to a nearby property damage call around 7:30pm when the incident took place. A nearby resident had shown police security footage of a group throwing a bottle at her car. One of the women on the porch was said to match the description of someone in the security video.

Police claimed that Smith kicked an officer during her arrest. Additional video showing what took place while Smith was being detained into the police vehicle was later released.

Smith has been arrested and faces charges of simple battery against a police officer and felony obstruction. According to the Root, she was released on $5,900 bond Wednesday night.

Based on the video, an investigation around the arrest is now taking place. According to a Gwinnett police spokesperson, Officer Oxford has been placed in an administrative role within the department for the time being as the internal investigation ensues.

In a statement regarding the incident Thursday, Gwinnett police spokesman Cpl. Collin Flynn stated “The police department takes all use of force seriously… All use of force cases are administratively reviewed through the chain of command. An investigation into this incident is being conducted.”