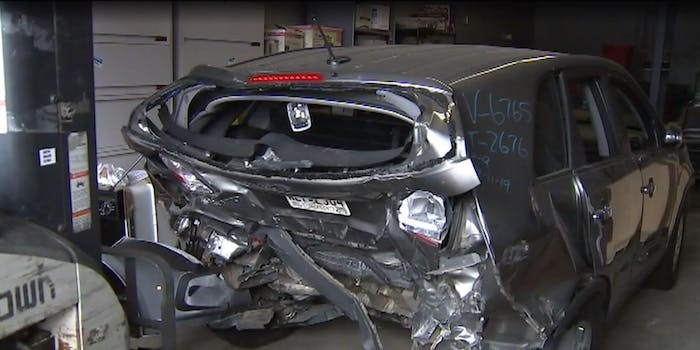 He was reportedly watching a 'Grand Theft Auto' video.

Following a collision between a cop car and another driver that put a woman into a coma for four weeks, a police investigation found that a YouTube video was playing in the officer’s vehicle during the crash.

According to WSB TV in Atlanta, police officer Todd Ramsey of Georgia’s Gwinnett County rear-ended a car driven by Sarah Wood in April. The high-speed collision reportedly put Wood, who said she was born deaf, into a four-week coma and caused her a traumatic brain injury that has not allowed her to work.

WSB TV reported that in an internal investigation, Gwinnett County police discovered a YouTube video had been playing on Ramsey’s in-car computer during the time of the accident.

“I don’t believe there was any attempt to stop or swerve because he didn’t see her because he wasn’t looking,” Susan Witt, Wood’s attorney, told the TV station. “He was looking somewhere else.”

The investigation concluded that a Grand Theft Auto video was playing on Ramsey’s computer when the officer was stuck in stop-and-go traffic on Interstate 85. Wood was moving at 6 mph, and Ramsey was traveling at 68 mph when he collided with her.

[The investigation] shows Ramsey had multiple browser screens open on his onboard computer terminal, pulling a large amount of data.

It states that before getting on the highway, Ramsey was sitting and watching a Grand Theft Auto video and that video was still playing at the time of the crash.

Ramsey told investigators he had a problem with his eye or contact.

In the aftermath, Ramsey was cited only for following too closely. Asked by WSB if the penalty would have been different if Ramsey wasn’t an officer, Witt said, “Well, absolutely.”

The police department declined to talk to the TV station, but after the accident, Ramsey was demoted and banned from driving a Gwinnett County vehicle (this reportedly was his eighth at-fault accident).

“This wasn’t an accident,” Witt said. “This was a serious collision that should have and could have been avoided.”