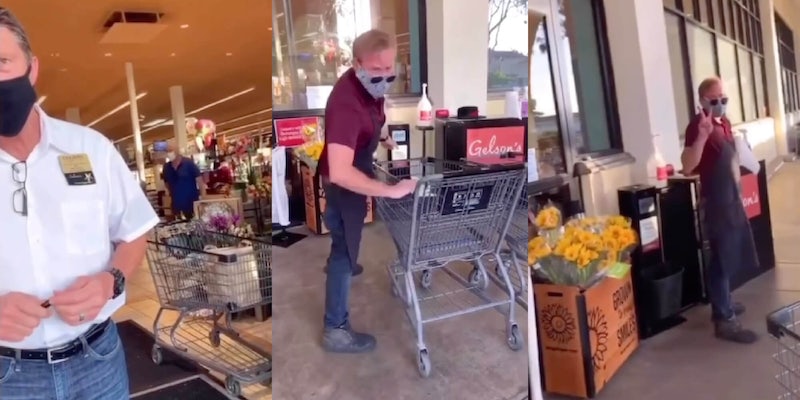 'You're discriminating against me now, do you know that?'

A woman in California has gone viral after throwing a fit over a grocery store’s mandatory face mask policy.

Video filmed by the woman, who identifies herself as Shelley Lewis, was posted online and immediately began spreading across social media.

The video shows the woman being denied entry into a Gelson’s supermarket in Dana Point after refusing to wear a face mask.

Lewis responds to the policy by demanding to see a manager. The internet quickly dubbed the woman “Karen,” a meme used to refer to an entitled middle-aged white woman.

When the manager arrives, Lewis claims to have a “medical condition” that keeps her from being able to wear a mask.

The manager responds by kindly offering to shop for the woman, causing her inner-Karen to come out even further.

“You’re discriminating against me now, do you know that?” Lewis says.

After threatening to sue the store, the woman eventually demands the phone number to the store’s corporate office.

Meanwhile, the man outside the store, who initially refused Lewis entry, proceeded to dance while wiping down shopping carts.

But the Karen couldn’t let the employee’s joy get in the way of her tantrum.

The video garnered over 42,000 upvotes on Reddit’s popular r/PublicFreakout subreddit thus far. Users also weighed in on the woman’s mini-meltdown.

“She clearly never had any intention of shopping,” u/jessflyc wrote. “She just wanted to go out and be an asshole.”

Others questioned the validity of her alleged medical issue as well.

“I’m sure she was disappointed it didn’t escalate more,” u/WillBoling added. “As a healthcare person, I am struggling to figure out what ‘medical condition’ she could have that prevents her from wearing a mask.”

As it turns out, perhaps unsurprisingly, it appears that Lewis is also a devout believer in “flat earth.”

Numerous users noted that the woman’s Facebook profile referenced the bizarre conspiracy theory. A profile for a woman named Shelley Lewis was also found on the website for a flat earth conference that took place in 2019.

“Shelley Lewis is a passionate truther, a licensed holistic health practitioner, a certified lymphologist, a vegan chef, photographer, and co-director and co-producer of The Plane Truth Documentary,” the page says.

Lewis is far from the first Karen to emerge amid the ongoing coronavirus pandemic.

Earlier this month, a woman dubbed “Red Lobster Karen” was filmed fighting employees at a restaurant after having to wait three hours for food.