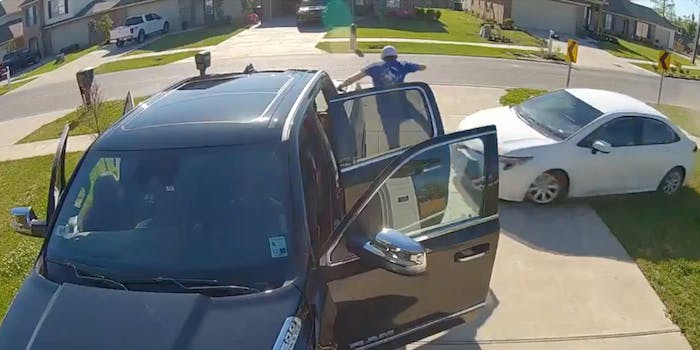 'You're impeccable; you take responsibility for your actions,' the recording can be heard after the driver hits the man.

A viral video shows a driver plowing into a man in a home driveway while listening to a self-help audiobook.

TMZ reports the driver lost control of the vehicle while listening to The Four Agreements and allegedly reaching for his cellphone on the floorboard. He hit a man who was by his own vehicle.

In the short clip of the incident, which was posted across social media, the man seemingly sees the car coming his way and tries to run out of the way. When he can’t get out of the way in time, he makes a last-ditch effort to avoid getting hit by jumping up. The car slams into both him and his parked truck.

The man’s apparent daughter was on the other side the truck at the time of the crash. She starts calling out to her “dad.”

The driver gets out of his own vehicle to check on the man, but he is drowned out by the audio recording blaring from his car. “You’re impeccable; you take responsibility for your actions,” the recording can be heard.

The man who was hit posted the clip to the r/IdiotsInCars subreddit on Saturday with the caption: “Glad I jumped…”

The redditor, u/casualt123, alleged in the comments section that the man was driving a rental car with a suspended driver’s license. He said that he and his daughter were cleaning out his truck at the time and that he might have suffered a torn muscle/ligament.

TMZ reports the man is planning to take legal action.

The Daily Dot has reached out to u/casualt123.