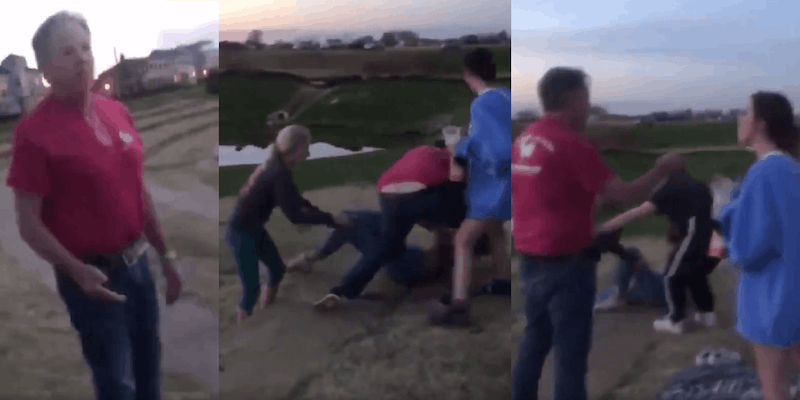 The man was placed on leave, and the incident is being investigated by police.

An unidentified doctor was filmed strangling a Black teen for not following social distancing guidelines.

In the video, which was posted online, the man is seen approaching a group of teens and arguing with them. He then proceeds to shove three of them and choke one, the only Black person in the group.

“We are leaving,” one girl is heard saying in the video. “Please let’s not cuss at each other.”

The man then points at one of the girls and calls her an asshole. “What the f*ck is your problem?” another asks him before he gets physical.

A police report showed that the victim was 18 years old and suffered minor injuries after choking her and having “impeded her breathing.” The man has not been identified because hasn’t yet been charged. It is unclear if he will be charged in the future.

According to WDRB, “The investigative report lists the possible charge as strangulation 1st degree, which is a felony.”

The man in the video was identified as a physician, who practices at the Southern Indiana Anesthesia Consultants, according to WDRB.

The Southern Indiana Anesthesia Consultants stated in a press release that he was placed on administrative leave, per WDRB.

The Louisville police also released a press statement stating that is has been made aware of the video, which circulated on social media.

“Officers from the 8th Division responded to a call to this incident Saturday and took a report,” it wrote. “Obviously, we do not advise individuals concerned about social distancing to take matters into their own hands and confront people about it, especially in any physical way.”

It then urged those concerned about large gatherings to call the police and make a report.