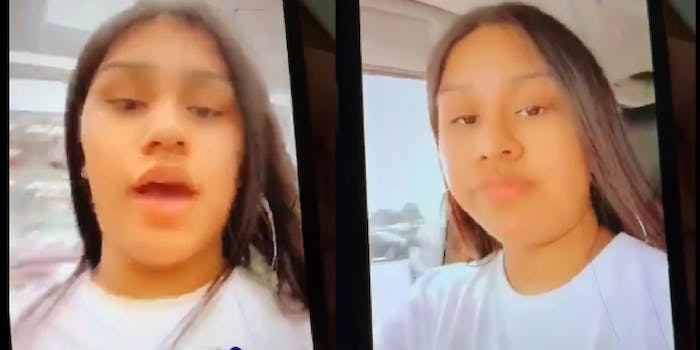 Teen arrested after bragging about spreading coronavirus in Walmart

'I'm here at Walmart about to infest every motherf*cker because if I'm going down, all you motherf*ckers are going down,' she says in the Snapchat video.

Texas police have arrested a teen who made numerous claims on her Snapchat that she planned to intentionally spread the coronavirus.

The Carrollton Texas Police Department announced they identified the teen over the weekend as 18-year-old Lorraine Maradiaga, Insider reports. Police arrested her “late Tuesday morning,” according to a news release.

One of Maradiaga’s Snapchat videos is said to have been taken at a local COVID-19 testing site, police spokesperson Jolene DeVito told NBC News.

“I’m here at Walmart about to infest every motherf*cker because if I’m going down, all you motherf*ckers are going down,” Maradiaga said in one clip, Insider reports.

There’s “no proof Maradiaga has tested positive” for the coronavirus, police said.

A person commits a terroristic threat if they “(threaten) to commit any offense” such as placing “the public or a substantial group of the public in fear of serious bodily injury,” according to the Texas Penal Code.

Prior to Maradiaga’s arrest, police said they had not confirmed if Maradiaga presented “a threat to public health,” but they were taking her Snapchat claims “very seriously.”

“If you want to get the coronavirus and f*ckin’ die, call me,” Maradiaga said in another Snapchat video, Insider reports. “I’ll meet you up, and I will shorten your life.”

Police were alerted about Maradiaga’s Snapchat posts after videos circulated online, according to NBC News.

Last week, Maradiaga responded over Snapchat in a subsequent post about the people sharing her videos online.

“I had like 60 people screen record my whole Snapchat,” Maradiaga said. “I don’t give a f*ck.”

Back in January, teens on TikTok posted videos pretending to have the coronavirus in hopes of gaining notoriety.

In March, the Tyler County District Attorney’s Office, located in Texas, charged a person “with circulating a false report,” for “falsely claiming on social media” they had the coronavirus, the New York Post reports.

“As a condition of her bond, Maradiaga is ordered to quarantine for 21 days upon date of release from custody as a precaution,” police said.