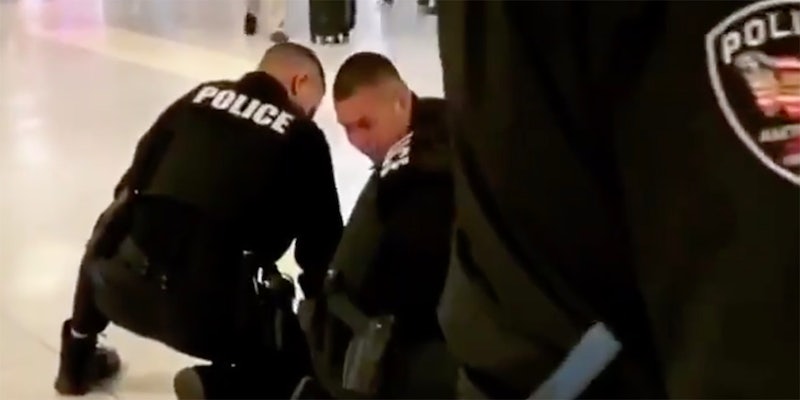 'I didn’t do anything at all.'

A graphic video circulating on social media shows four New York Police Department cops restraining a man on the ground as he bleeds from his face and screams.

The clip was shared Thursday by the Twitter account for Decolonize This Place, a grassroots movement led by criminal justice activists who regularly circulate videos of police brutality. The latest video, which according to Decolonize the Place was filmed in New York’s Pennsylvania Station, garnered a few thousand views by Friday.

The 40-second video starts with four cops holding the man on the ground as he screams.

“He‘s bleeding, what did he do?” asks a woman behind the camera. According to Decolonize This Place, a Twitter user under the name Shey Ali initially shared the video.

“I don’t know too much of what happened but I know that police really hurt him and this what I came off the train and saw,” Ali said, according to Decolonize This Place.

In the video, the man screams in pain with his face on the floor. “What’d I do wrong?” he asks.

“I didn’t do anything,” the man says.

The woman is then heard responding to someone who asks if the cops did that to the man.

“Yes they did that to his face,” she says.

“Oh, my God,” the other person responds.

“What the fuck did he do?” the woman asks again, while the officers ignore her.

“I didn’t do anything at all,” the man says. A police officer then moves to stand in front of the camera, blocking the bleeding man.

Decolonize This Place said that the clip is only “limited footage” because of the full video’s graphic nature.

The video comes amid a heightened rise in awareness surrounding police brutality specifically on the New York subway, following an October incident where nearly a dozen cops chased and cornered a teen on the subway for fare-evasion. The NYPD was further criticized after another viral video showed police arresting a churro seller in a subway station.