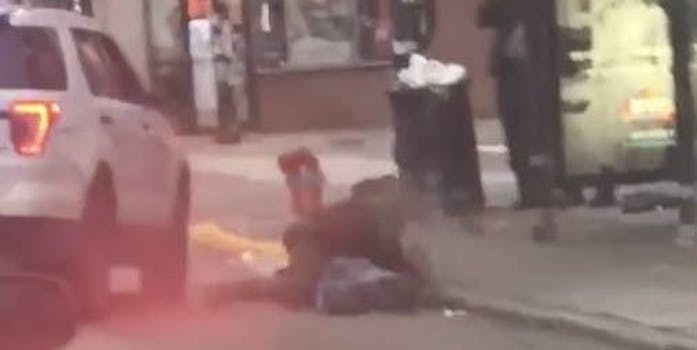 The officer has been removed from policing duties.

The Civilian Office of Police Accountability (COPA) is investigating a viral video that shows a Chicago officer body-slamming a man into the curb.

The incident reportedly took place on Thanksgiving Day in the Chatham neighborhood of Chicago. In the video, the officer lifts a man in a black hoodie and then throws him to the ground. The man’s head slams against the curb, and then he lies motionless.

According to COPA’s Twitter account, the group has launched a full investigation and is searching for witnesses.

Warning, this video is graphic! A man was seriously hurt after being slammed to the ground by @Chicago_Police on Thanksgiving Day in Chatham when he allegedly spit on an officer while being detained for drinking alcohol in public. @chicagosmayor Video captured by: Jovanna Jamison pic.twitter.com/jGN1jYq9BF

The Chicago Tribune identified the man wearing a black hoodie in the video as 29-year-old Bernard Kersh. According to the Tribune, Kersh was stopped for drinking alcohol in public, and the incident escalated when Kersh licked the officer and spit in his face. After being released from the hospital, Kersh was charged with aggravated battery to a police officer. According to the Tribune, Kersh was arrested in 2011 and 2018 for similar incidents.

Anthony Guglielmi, a spokesperson for the Chicago Police Department who spoke to BuzzFeed News, said that the officer in question has been “relieved of his police powers” while the incident is investigated.

“The incident is under investigation as the actions in the video are concerning,” Guglielmi tweeted.

An arrest that occurred in the 700 block of E. 79th is under investigation tonight as actions depicted on a social media video & the complaints of citizens are being taken very seriously. https://t.co/PL35f2as5O pic.twitter.com/B46haaMP0m

The video, originally posted to Facebook by Jovonna Jamison, spread to Twitter where people were enraged by the scene of the arrest.

Jamison told the Tribune that she was waiting at a red light when she saw the officer snatch the man’s drink away and slam him to the ground.

“I’m not really surprised because it happens so much in Chicago,” Jamison told the Tribune. “But I didn’t think I would ever see it front and center.”

“While a single video does not depict the entirety of the interactions between the police and the individual, this particular video is very disturbing,” Lightfoot tweeted.

While a single video does not depict the entirety of the interactions between the police and the individual, this particular video is very disturbing.

The Chicago Police Department did not immediately respond to the Daily Dot’s request for comment.