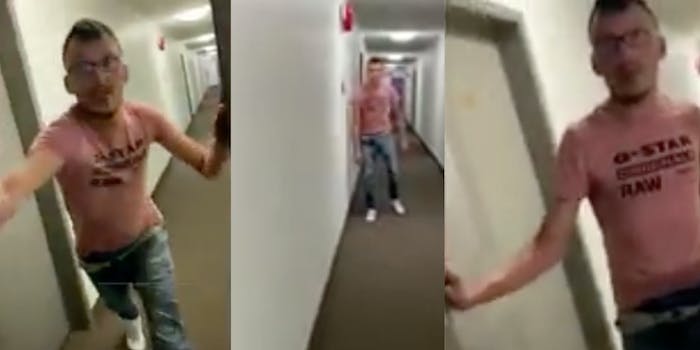 He also told the Filipino woman to 'Get the f*ck out of Canada.'

Police arrested a Canadian man after he threatened a woman who refused his advances.

Video footage shows Rylee Dodd, 28, in an apartment complex giving a Nazi salute and hurling racist insults at a Filipino woman after she didn’t give him her phone number.

According to Patricia Anne Medrano’s Facebook, at around 9:15pm on July 6, Dodd asked for her phone number. After she said no, he began his racist tirade. “Since I don’t want to give my number, he keep insisting to give his number to me,” Medrano told the Philippine Daily Inquirer.

“I just told my brothers to ignore him … but he is really being disrespectful and saying racial slurs like ‘Go back to your country!’ This is Canada, not Wuhan. You spread the virus,’” she continued.

In the video, Dodd yells: “I’ll kill you. I’ll fucking decapitate you. Filipino little bitch. Get the fuck out of Canada.”

Dodd then started kicking her apartment door and trying to attack her, while Medrano and her family waited for the police.

A spokesman with Edmonton Police told Raw Story that Dodd was charged with  “uttering threats and assault in relation to this incident.”

“Our Hate Crime & Violent Extremism Unit is also aware and [is] looking into this,” the spokesperson added.