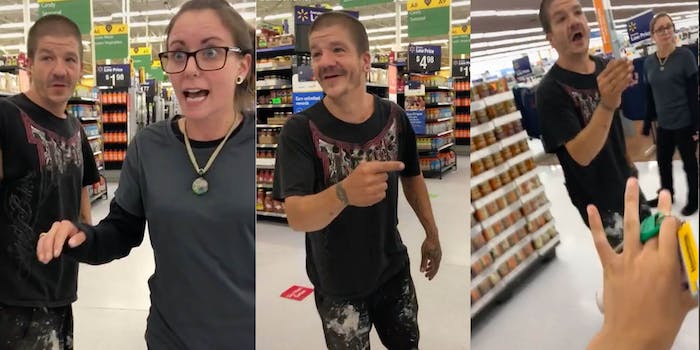 TikTok shows minors getting slut-shamed after confronting a Walmart catcaller

'You showed your a**. He complimented it, so get the f*ck over it.'

A young girl made a TikTok featuring the aftermath of her cousin, Hannah, a minor, getting catcalled by a man at Walmart.

The video, which is captioned “My cousin got catcalled in Walmart today,,, then it escalated,” now has over 19 million views with over 4 million likes on TikTok. The duo who antagonized the two girls have not yet been identified publicly.

The video begins with a woman defending the man’s actions, saying, “You showed your a**. He complimented it, so get the f*ck over it.”

The girl recording begins to defend her cousin, saying, “She can wear what she wants!” The couple continues to berate the girls as they try to get away from the couple. The video ends with Hannah crying and saying she is going to the front of the store.

She uploaded two more TikToks on the matter—one showing what happened before the incident and an update on finding the couple who harassed the two girls.

In the second video, captioned “Here’s the before from my last post,” the man tells her that she has “an ugly f*cking face, an ugly f*cking personality, a cute a**,” saying her a** is the only thing she has going for her.

The girl recording tells the man to walk away, but he continues to hurl verbal assaults at the girls, calling one a “c*nt.”

She updated her followers on what happened after. People seemingly found out where the woman in the video works: Autoserv of Tilton. The family-owned business, according to the TikToker, is getting review-bombed. The TikTok user told her followers not to leave any more bad reviews as AutoServ allegedly fired the woman. The man has yet to be identified yet.