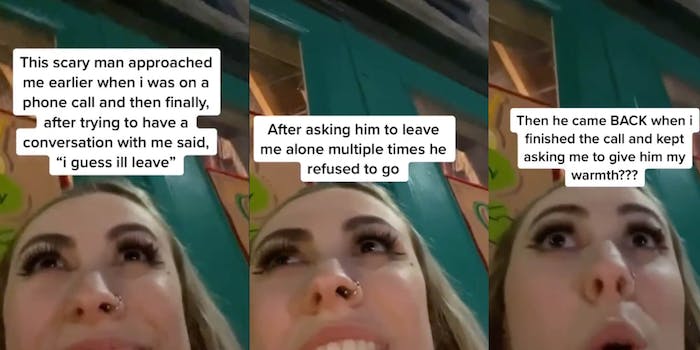 He gets mad after she repeatedly turns him down.

A TikTok video of 20-year-old Canadian college student Kaitlyn Murdoch has gone viral as a way to express the type of harassment women experience every day.

The video shows Murdoch waiting outside of a bar for her Uber when she is approached by a strange man. Murdoch’s face is the only thing visible in the clip, but the man can be heard off-camera, asking if she would “share her warmth” with him.

According to Cosmopolitan, added text in the video describes the context of Murdoch being approached outside of the bar.

“This scary man approached me earlier when I was on a phone call and then finally, after trying to have a conversation with me, said ‘I guess I’ll leave'”

Cosmopolitan also reports that Murdoch can be heard in the video saying, “I mean I don’t have any ‘warmth’ to give you, like you said.”

He continues to try and talk to her, asking her to clarify.

“You have warmth, just not to give?”

When she turns him down again, the strange man recruits another stranger to call her a “bitch.”

“Finally after I just straight up started to stop engaging, he finally got mad and just left and proceeded to get some random guy to tell me I’m a bitch,” Murdoch wrote in her video.

Murdoch told BuzzFeed that she originally filmed the video to show her friends what had happened.

“I want people who maybe think that women ‘exaggerate’ their fear of men to think again and realize it’s real, and it happens to almost every single woman or girl that I know,” Murdoch told the outlet.