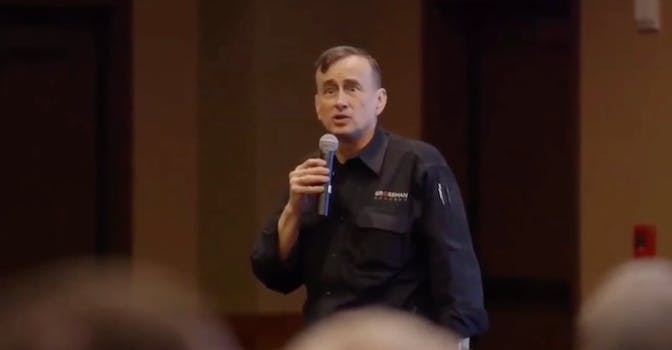 Video: Ex-army ranger says that sex after killing a human being is ‘the best sex’

'Killing is not that big a deal.'

A video of a former West Point psychology professor who trains police officers using his expertise on what he calls “killology” resurfaced on Reddit on Thursday. The former army ranger said that officers have “the best sex” after killing other human beings, Complex reports.

Dave Grossman, a self-described scholar, author, and soldier, speaks at police training seminars all over the world. Grossman’s name entered was trending on Twitter this week after a June 2017 video of him teaching “the philosophy of killing” reemerged on social media.

He says that he thinks people who kill others “would want to feel good about it” because of the “satisfaction of hitting the target under the stress of combat…to stop a deadly force threat, to save lives.”

Near the end of the video, Grossman says that after finishing their shift, a cop says, “Gunfight, bad guys down, I’m alive” and goes on to have “the best sex … in months.” He says, “Both partners are very invested in some very intense sex” and that “there’s not a whole lot of perks that come with this job. If you find one, relax and enjoy it.”

Initially posted by the New Yorker, the video shows Grossman saying, “Let’s be honest, I grew up in a law enforcement family. Maybe there was a day when if a man was asked for an ass-whooping it’s a cop’s job to give it to him. Well, that day is gone.”

“There is no action you can engage in,” he says. “That will not be on CNN and YouTube tomorrow morning.”

Later in the video, he states, “Don’t be afraid to get sued, everybody gets sued. Just a chance for overtime.”

Journalist Tariq Nasheed tweeted that they “have been warning people about Dave Grossman and that vile racially motivated Bulletproof Warrior training for years.” Another wrote, “paying guys like Dave Grossman to tell cops ‘Killing is not that big a deal’ and ‘Feel good about it’ seems like not a great idea.”

One person shared the tweet of Grossman speaking to the police officers and wrote, “You cannot reform this.”

Others tweeted that giving cops additional funds for training leaves room for the hiring of trainers like Grossman.

Grossman did not immediately respond to the Daily Dot’s request for comment.