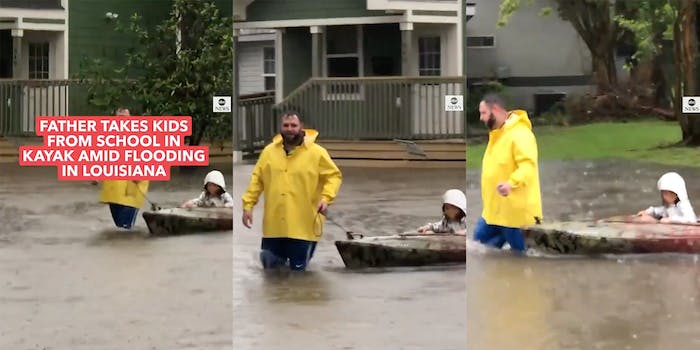 ‘This is not a heartwarming story’: Viral video shows dad transporting kids from school in kayak during flood

‘We are so effed in this country.'

A viral video posted to Twitter on Tuesday shows a dad transporting his kids in a kayak after flooded roads made driving unsafe in Lake Charles, Louisiana. But social media users are pushing back on ABC’s framing of the story as “heartwarming.”

“NO ROAD, NO PROBLEM: This dad used a kayak to pick up his kids from school, amid flooding in Louisiana,” ABC News tweeted.

ABC News framed the story as an uplifting tribute to creative parenting—but Twitter users chimed in that the clip represents a troubling story of climate change and failed leadership in Louisiana.

“This is not a heartwarming story. It’s a climate emergency,” wrote Edmond Guidry, user @edmondguidry, an attorney from New Orleans.

The video shows a reporter getting the father’s attention as he pulls his two kids in the kayak in the rain while trudging through flood water. The brown water appears just above knee level as the dad walks quickly through it wearing a yellow raincoat and track pants.

“Did you just pick them up from school?” the man asks.

“Yeah, they were supposed to be picked up at three, but it took us that long to get here,” the dad replies. “Y’all have a great day, man. Stay safe.”

“Y’all too. Be careful,” the reporter responds.

The 30-second video ends with the dad pulling the kids in the kayak off camera as the family heads home.

Many social media users said ABC’s headline—“No road, no problem”—was insensitive to the thousands of people heavily impacted by the floods in Louisiana this week. Three people have died in the floods.

“This is shameful. The headline failure. The infrastructure failure The failure of American society,” one user wrote. “We are so effed in this country.”

“This isn’t a feel-good story, ABC,” another user added.

“Whoever came up with the ‘No road, no problem’ headline should be fired. These are very big problems. Huge,” a third user tweeted.

Others on Twitter were baffled that kids were still in school amid the storms and flooding.

“I promise you whatever they’re learning in school is not that important,” one user quipped.