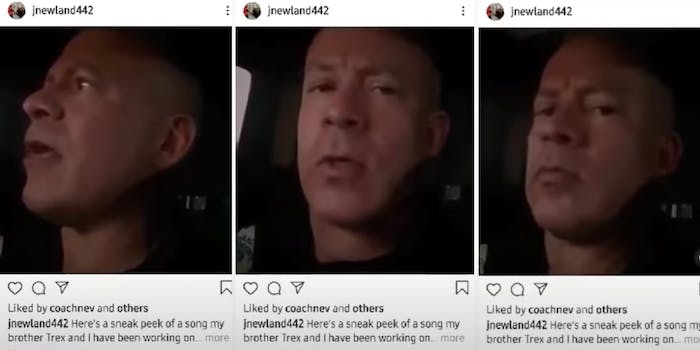 ‘Around your neck I flex this choke’: Video shows cop’s white supremacy rap

The Alabama officer was suspended and demoted.

An Alabama police officer was suspended and demoted after an Instagram video showed him rapping lyrics about white supremacy, the Associated Press reports.

The video, which has since been deleted, prompted an internal investigation by the Homewood Police Department. Officer Jon Newland received a three-day suspension and a demotion from corporal to officer, according to AP. Newland was also moved from the department’s training division to patrol.

“Here’s a sneak peek of a song my brother Trex and I have been working on,” the captions aid.

Newland rapped, “O.G. like Hel with a rebel yell, I prevail and sail like a Viking with stories I tell.”

Other lines include, “I wear black and blue / Professional gunslinger, rap singer too … My ways are a blaze of mysterious smoke / Around your neck I flex this choke.”

Newland uploaded the video in May, nine days before George Floyd was killed by a police officer, Al.com reports.

The Homewood Police Department, which did not immediately respond to the Daily Dot’s request for comment, said in a statement that the lyrics in Newland’s video do not reflect the department’s policies or views, per Al.com.

“Our preliminary investigation has revealed that the officer was off duty when the video was posted,” the department’s statement said. “And was not representing himself as a Homewood Police officer in any official capacity.”

Some have expressed their frustration with the police department’s response to the video.

Another tweeted that Newland’s rapping “is the real crime here.”