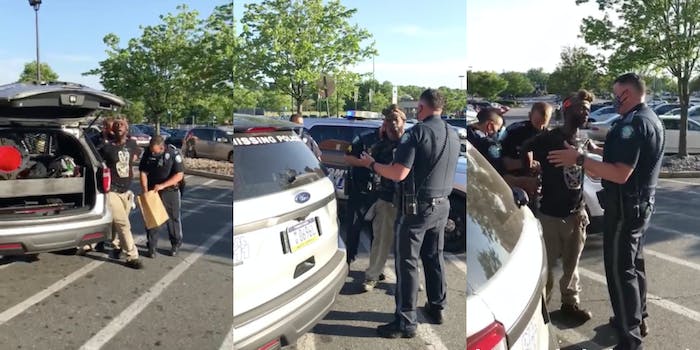 He had just purchased a bike for his son.

Police officers tased, forced to the ground, and arrested a Black man inside of a Walmart on July 20.

A video of the arrest went viral on Twitter. The District Attorney’s office responded to the incident, deeming the officers “acted appropriately,” according to a Facebook post from the office.

According to court records and Heavy, Stanley Gracius was booked into the Berks County Prison and is facing multiple charges, including three felony charges and multiple misdemeanors. Gracius was released on July 21 after he made bail, according to Heavy.

Walmart began requiring all customers to wear a face mask starting July 20. Gracius was not wearing a mask in the video, however, none of the charges or information regarding masks was apparent from the police language in the videos or in the DA’s statement.

According to the DA’s Facebook post, a store manager called the police after Gracius “was riding the bicycle through the store, weaving back and forth in the aisles, hitting some shopping carts and almost hitting other shoppers.”

Based on the video, Gracius seemed to be preparing to leave the store at the time of the arrest, as he was near the checkout counter with the bike and had a receipt in his hand. According to TooFab, he had just bought the bike for his son.

@labousaa44 tweeted underneath her video that the “kind man was test riding a bike through the store while playing some music and telling random strangers he hopes they have a great day and complimenting them. he was absolutely no bother to anyone.”

In the video, Gracius repeatedly says he didn’t do anything wrong, that he paid for the bike and has the receipt. He also asks why he is being arrested.

Following the in-store arrest, @labousaab44 tweeted that “the officers tied his feet up with a belt and were able to forcefully shove him into their vehicle” while outside.

In another video posted to Reddit, Gracius identifies himself while the two officers empty his pockets next to a squad car in the parking lot. Gracius speaks directly to the camera, asking the recorder to put it on Facebook.

“Today in Walmart, I went to purchase a bike for my son. Everybody saw, and it’s on camera. I paid with cash and a credit card, and I had a receipt,” Gracius says in the video. “Please tell me what exactly I did wrong. … I love you guys; why are you doing this?”

Another officer appears on video one minute into the 10-minute video, identifying himself to Gracius as “Joe.” Joe tells Gracius that he doesn’t know why Gracius is being arrested because he had just arrived and urges him to remain calm.

The person recording the video repeats that Gracius is being arrested “because he’s Black.”

Toward the end of the video, a larger crowd begins to gather and protests his arrest.

Gracius had a similar charge in 2014, according to the DA’s Facebook post. He pled guilty to the case and served a few months behind bars, according to Heavy.

Gracius has posted multiple Facebook Lives of himself discussing his refusal to wear a mask, as well as another police encounter earlier on Wednesday.