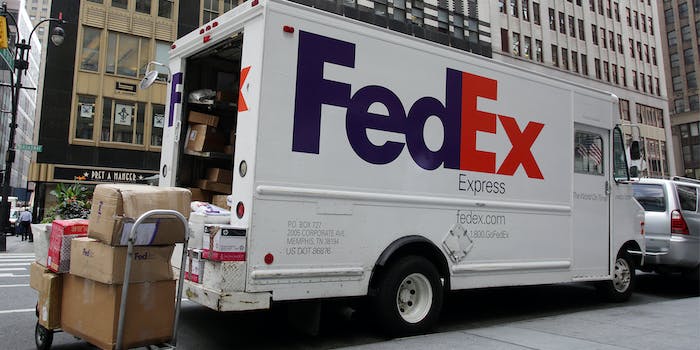 FedEx has drawn the ire of social media users after a video showed a driver refusing to help an elderly man who fell outside his house.

The exchange reportedly took place in Freeport, Texas, where the 89-year-old man fell outside his front door. His Ring doorbell camera captured the incident.

“Hello, help please,” the man says to the driver as he walks toward his truck. “Give me a hand. I need to get up.”

“I can’t do that, boss,” the driver replies.

The man’s daughter, Maria Kouches, said he fell roughly 15 minutes before the FedEx driver arrived, ABC13 reports. Kouches added that her father has dementia and trouble with his legs, and this is not the first time he’s fallen. He laid on the ground outside his door for 10 more minutes before she arrived at his house.

“(He) didn’t at least ring the doorbell or call 911!” Kouches wrote in a widely shared Facebook post. “Thank God he’s OK, but what if he hadn’t been?”

In a statement to the Daily Dot, FedEx said, “We extend our sincerest concerns for the well-being of the person depicted in this video and are relieved to learn he was not seriously injured. We can affirm that there is no higher priority for FedEx Ground than ensuring the safety of our team members and customers in the communities we serve.”

The company said it has “reviewed the circumstances behind this unfortunate incident and are taking the appropriate action to address this matter.” In a statement to ABC13, the company said it’s also “closely monitoring and adhering to guidance by the Centers for Disease Control and Prevention (CDC) and other public health organizations regarding recommended precautions.”