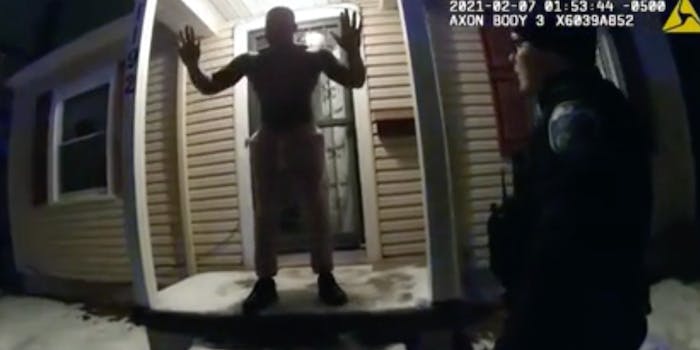 Bodycam footage shows a police officer in Ohio shoving snow into a Black man’s mouth during February arrest. The subdued man can be heard on the video saying, “I really can’t breathe. I apologize, sir.”

The body camera footage of the incident was recently released, reopening wounds regarding police brutality and Black people’s necessity to maintain calm when faced with such brutality.

Akron police responded to a call about a man allegedly threatening a woman with a knife on the night of Feb. 7. Two 911 calls reportedly alleged that Charles Hicks II was being violent with multiple parties during a house gettogether, causing one woman to tell the dispatcher that “nobody feels safe.”

In the extended version of the video, Hicks is standing on his front porch, accusing the police officers of disrespect and claiming to not understand why they were at the scene. After a brief conversation with the police, a shirtless Hicks is taken down to the ground.

The video shows former Officer John Turnure shoving snow into Hicks’ mouth and packing it in. According to the Akron Beacon-Journal, Hicks was already in handcuffs by that point.

Despite Hicks clearly having trouble breathing, he remains apologetic and repeatedly refers to the officer as “sir.” “I really can’t breathe. I apologize, sir,” he says.

Turnure reportedly resigned from his position on March 30.

Hicks also reportedly alleged that Tunure applied unnecessary force in placing a knee on his neck. “I just felt like they was trying to kill me,” Hicks reportedly later said. “It was one of the scariest moments of my life.”

Before the bodycam footage was released, Akron city officials disputed Hicks’ claims in a statement: “The city strongly refutes any allegations related to the officer’s knee affecting the breathing of the arrestee or that it caused injury to the arrestee in any way. The arrestee also appeared in court regarding the charges brought against him, and at no time was any such allegation raised by him. These are being raised for the first time by his lawyer.”

“The tactic?” Eddie Sipplen, Hicks’ attorney, said regarding the city’s news release. “Yeah, the tactic is that they restricted my client’s breathing and airway by either having a knee on his neck and trying to stuff snow down his throat.”