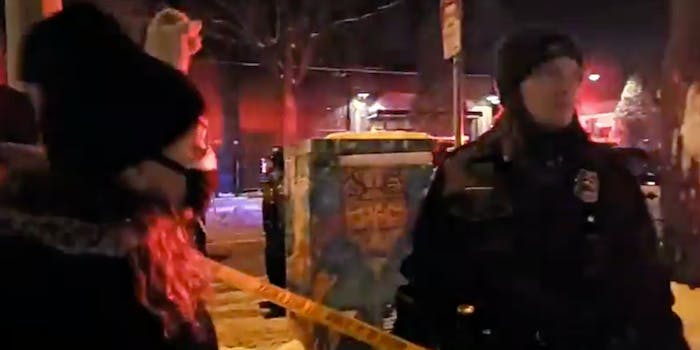 Video: Cop allegedly spits at Minneapolis protester after being asked to put on mask

'This was a couple of hours after the cops murdered someone in minnesota AGAIN. you can’t reform this.'

A cop allegedly spit at a protester who asked her to put on a face mask. The altercation happened during protests against the police killing of a man during a traffic stop on Wednesday night in Minneapolis.

The altercation was caught on independent journalist Demetrius Pendleton’s Facebook Live. At the end of the over three-hour stream, a woman asks a cop with the Minneapolis Police Department to “put on a mask,” repeatedly telling her “it’s the governor’s mandate.”

“The system that you protect mandates that you wear a mask, so are you going to put one on?” she questions the unidentified officer. “So we don’t have to smell your stank ass breath.”

“Put on a mask,” the protester continues. “What the f*ck is wrong with you?”

While the officer is now out of the frame, the protester looks down at the ground and says, “Did you just spit? That is so disgusting. You are actually ratchet. Disgusting.”

The protester continues to say that the officer “spit at me.”

The officer claims she didn’t.

“There’s a f*cking pandemic,” another protester tells the officer. One protester even offers her a mask, but she refuses to take it.

The protesters start to collectively chant “Wear a mask” at her, and the officer walks away from the scene.

The allegation has also been circulating on Twitter, bringing more attention to the live stream. “i just saw a cop spit in a protester’s face on a livestream in minneapolis after the protesters asked the cop to put a mask on because there is a global pandemic still happening. this was a couple of hours after the cops murdered someone in minnesota AGAIN. you can’t reform this,” one viral tweet read.

On Wednesday night, MPD officers fatally shot a man during a traffic stop. MPD Chief Medaria Arradondo claims that witnesses said the man fired the first shot, and police described him as a felony suspect, according to the Star Tribune. While police have yet to release the identity of the man, a man claiming to be his father has identified him as 23-year-old Dolal Bayle Idd, according to KSTP. His death marked the first killing by a Minneapolis police officer since the death of George Floyd.

The Daily Dot has reached out to Demetrius Pendleton, the Minneapolis Police Department, and the City of Minneapolis.