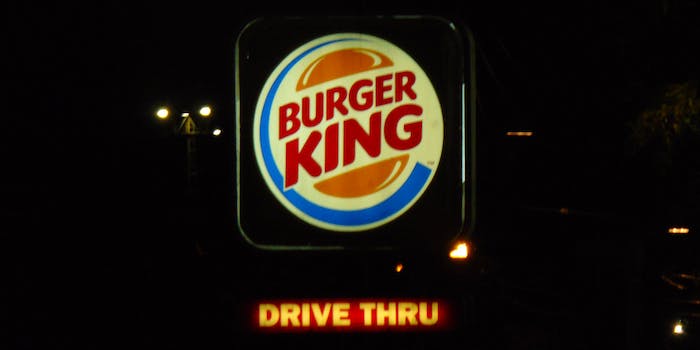 The 'Karen' accuses the Black driver of cutting in line.

A viral video shows a white woman dubbed a “Karen” calling the police on a Black driver in the Burger King parking lot and alleging that she cut the drive-thru.

The video starts with the woman and her partner standing in the middle of the drive-thru lane and calling the police on the Black driver, who is filming.

“They are calling the cops, y’all, over Burger King. Because they made an illegal turn in the parking lot,” the driver says.

The Black driver alleges that the white couple got upset and began honking their horn. The couple proceeds to get out of their car and stand in front of the Black driver’s car. The Black woman tells the couple several times to move out of the way. She also says that the couple is calling the police.

As the woman continues to film, she asks the so-called “Karens” about their political beliefs. “Y’all voted for Trump, didn’t you?” she says.

A few seconds later, another car pulls into the drive-thru. The woman filming turns to them and says, “Sorry, you’re not gonna eat today because they’re pressed.”

The driver continues to tell the couple to move by yelling and honking her horn. She then gets out of her car and tells them to move. The white woman can be heard saying on the phone, “She cut me off to get to the uh, takeout, to the uh Burger King.”

As the woman continues to talk to the police, the woman filming yells, “This is a Karen and a Ken.”

A few seconds later, the police arrive at the Burger King and ask what happened. The woman relays the incident to the police officer and then gets back in line to order her food.