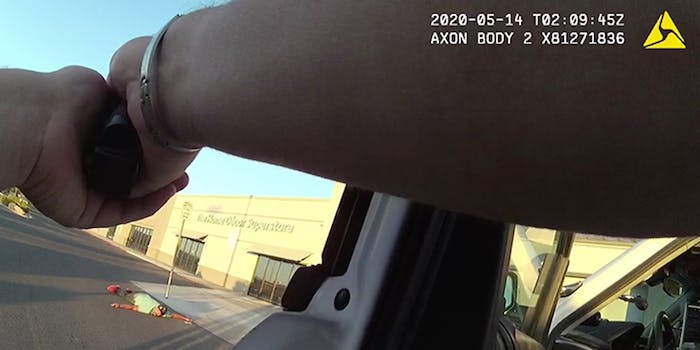 Officers say they 'feared for their life.'

Newly released body camera footage from the Prescott Valley Police Department in Arizona shows cops unleashing a K-9 on a man who appeared to be complying with orders. The dog can be seen attacking and biting the man several times.

According to an AZ Central report, Arizona cops say they had to sic a K-9 on a 28-year-old suspect, Alfredo Saldivar, after he was involved in a high-speed chase on the evening of May 14.

Salidvar was allegedly driving erratically at high speeds and into oncoming traffic through Prescott and Prescott Valley when cops pursued him, and he refused to pull over. Police say Saldivar sped off and attempted to ram a police vehicle before an officer who “feared for his life,” fired shots at Saldivar hitting him and his vehicle, until the suspect eventually left his vehicle on foot at a shopping center parking lot. There, a K-9 dog was released onto Saldivar even though at that point, he appeared to comply with orders from multiple officers.

In a Sept. 9 statement regarding the incident and the new release of body camera footage from the arrest, Prescott Valley police wrote, “In response to incomplete information that is being put out on social media regarding the arrest of Alfredo Saldivar in May 2020, the Prescott Valley Police Department is providing this accurate depiction of the events
as they transpired to provide clarification and transparency.”

The use of K-9 force depicted in the video as well as the events leading up to Saldivar’s arrest are now under investigation.

The video begins with an officer with his gun drawn toward the suspect, who is laying face down on the ground. Police order him to get on his knees, put his hands behind his back, lift his shirt up, and turn away from the officers to ensure he is not carrying a weapon. Saldivar complies with each order.

At the point, an officer can be heard commanding the suspect again. “Here’s what I want you to do. Stand up,” he says as Saldivar begins to stand, placing his right foot up onto the ground first and attempting to lift the rest of his body from his knees. In that moment, the K-9 is released from another officer off-screen, enters the frame of the video, and attacks the Saldivar by biting him on his backside. As Saldivar screams, he is again ordered to drop to the ground, which he does.

“Please stop it,” he yells out as officers continue, now ordering him to roll onto his belly. Saldivar attempts to comply, struggling to roll over as the dog continues to attack his left arm. Officers slowly move in as the dog continues, and Saldivar eventually rolls over while pleading for the K-9 to stop. After officers put Saldivar in handcuffs, one officer is heard rewarding the K-9, saying “that’s a good dog” multiple times until the dog finally ceases the biting.

The Prescott Valley Police Department has said that the reasoning behind letting the dog loose was that Saldivar appeared to stumble and hesitate when standing up, causing concern in officers on the scene that he would take the opportunity to flee arrest once more.

“As officers confronted Saldivar and gave the him numerous verbal commands to surrender, it initially appeared he was complying, then hesitated. Saldivar’s hesitation and the observations made by police led
officers to believe that he was going to flee from law enforcement again, which resulted in a Prescott Valley Police K‐9 being deployed,” the department wrote in a statement.

Saldivar was transported and booked into the Yavapai County Detention Facility on felony charges of endangerment, aggravated assault upon law enforcement, criminal damage, unlawful flight, leaving the scene of an accident, and resisting arrest.

The incident has received some backlash online as several viewers feel as though the attack was not justified based on what the body camera footage reveals.

“Something is rotten with Prescott police leadership,” wrote one user in a tweet. One user wrote in response to the video “Tells the dude to stand then sics dog on him wtf.” Another user underscored the violence displayed, saying “Welcome to Prescott and Prescott Valley Police … Where they get to become the jury and judge and administer justice after a man complies that they are angry with…”

The Daily Dot has reached out to the Prescott Valley Police Department for comment.