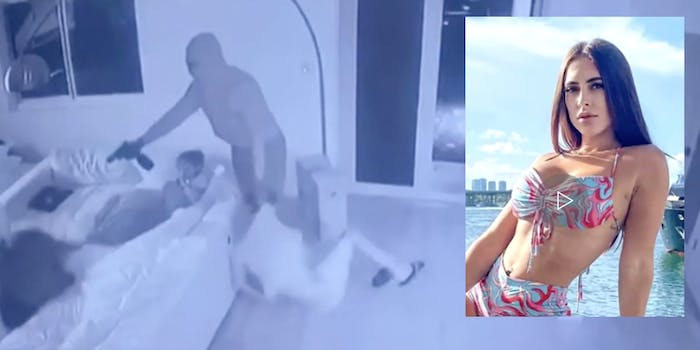 'He told me to put my gun down. I just shook my head no.'

A popular OnlyFans content creator has gone viral online after getting into a gun battle with burglars in an effort to protect her family.

Ansley Pacheco, a 26-year-old with nearly 13,000 likes on OnlyFans and over 160,000 Instagram followers, was inside her Florida home on Oct. 4 when two armed men forced their way inside.

The two burglars, who had seemingly been stalking the home, were able to gain access to the property after a friend of the homeowner arrived and opened the home’s front gate.

The entire home invasion was caught on camera by the family’s surveillance system.

Pacheco told Local 10 that she knew something was wrong when she suddenly heard shouting in the living room.

The model quickly grabbed a firearm from the nightstand and opened her bedroom door, only to find herself face-to-face with one of the burglars.

“He told me to put my gun down. I just shook my head no, and then I said, ‘Don’t shoot me, my son is in here,'” Pacheco recalled.

That’s when the gunmen opened fire on Pacheco, sending at least six or seven rounds through her headboard, television, and closet door.

Pacheco returned fire, causing the gunmen to flee the home.

“I just knew that I had to do something, and my first instinct was to grab the gun and defend my husband and my son,” she added.

Pacheco’s husband Daniel can be seen grabbing the firearm from the model shortly after and running outside in an effort to stop the burglars from getting away.

Pacheco, although rattled from the incident, is thankful that no one, including her son, was seriously injured.

Neither Pacheco, her family, nor their guests said that they recognized the intruders. Police are currently looking to determine whether the attack was random or targeted.