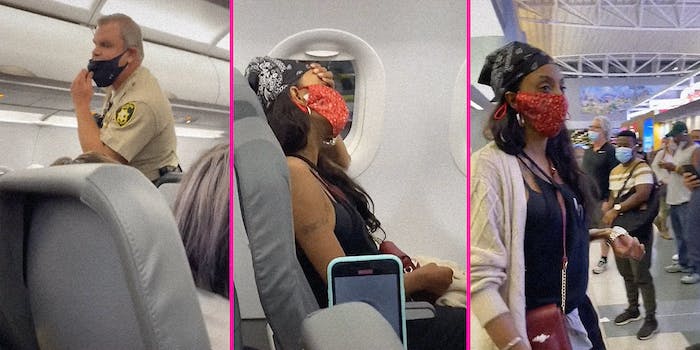 A woman allegedly refused to stop using her phone on a flight, causing all passengers to be forced to disembark the plane.

A viral TikTok shows police officers requesting the woman to turn off her phone. When she refuses, one of the officers says all of the passengers will have to exit the plane.

“Are you serious? Oh my God, woman. Get off the plane,” one passenger shouts.

“You have got to be kidding me right now,” another says.

Another clip then shows the disembarked passengers waiting at the terminal as the woman is escorted away by police officers.

“You suck!” one person shouts.

The video, which received over 9 million views, was shared to TikTok by user @ashleynhowey on July 8 and originally recorded by her father, the user says in another video.

In the additional video, the user says the flight attendants asked everyone to turn their phones on airplane mode and specifically requested the woman turn off her phone and properly wear her mask twice before involving the police.

TikTok users in the comments questioned why the woman was asked to leave the plane as she appears to be wearing her mask correctly in the initial video.

“Ok, I need more details, what was the problem because she has a WHOLE ATTITUDE,” one user said.

One user noted that one of the police officers’ masks was not covering his nose.

“The cop can’t wear his mask right either,” they said.

Some users made racist comments toward the woman, who is Black, by referring to a man wearing a Burger King hat who shouted the N-word on a JetBlue flight last year.

The TikTok was also shared on the r/ActualPublicFreakouts subreddit, where many users speculated that passengers were disembarked to avoid what happened to David Dao in 2017.

Dao was forcibly removed from an overbooked United Airlines flight in Chicago, during which he was knocked unconscious and dragged down the aisle of the plane. The airline faced broad public scrutiny for the situation.

The Daily Dot was unable to contact the woman, the airline, or user @ashleynhowey.