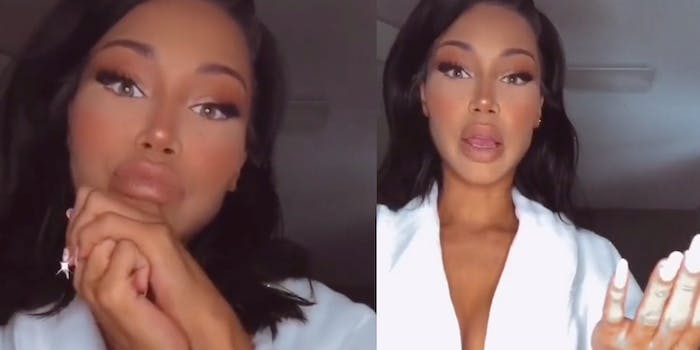 ‘They were literally pointing and laughing at me’: TikToker accuses Kylie Jenner of making fun of her dancing, making her cry

Model Victoria Vanna has dropped two TikTok videos claiming that Kylie Jenner “bullied” and “made fun” of her dancing during a music video she was making of Tyga’s 2015 “Ice Cream Man,” where Jenner was reportedly on set with Jordyn Woods among others.

“As soon as I walked out, she’s looking at me up and down, whispering and pointing and making fun of…” Vanna says, shaking her back in a dance motion, “like how I was dancing. And they were all like… just making fun of me, clearly,” she said.

She goes on to say she was “full-on crying.” The first viral TikTok has been viewed 2.6 million times as of Friday.

In a second video, she continued her story, claiming that after Jenner and her friends came out after her, they were sitting in her car.

“It was almost like they were following me,” Vanna says.

She said as she was walking past them, they were eating McDonald’s and were “literally so talking about me.”

Vanna added that she felt deeply embarrassed and her face “got hot,” especially because she had been a fan of Jenner.

“I was like, excited to meet her and I just felt bullied for no reason,” Vanna added.

She said that even though the incident took place years ago, she is sharing it now because she is over it. But she also added that she does not hold any grudge against Jenner.

“In no way am I mad or saying this is still who she is, I’m just saying what happened to me,” Vanna said before ending the video.

The videos were dropped a week ago and began making headlines on Thursday after the Shade Room shared them on Instagram. Jenner commented: “…this never happened.”

Jenner has not made any further claims on her social media.