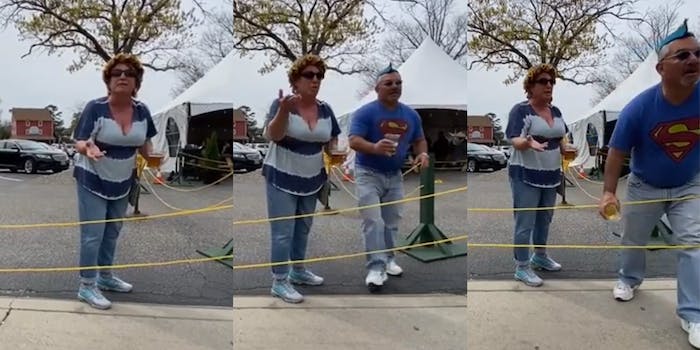 'There’s a man pissing in the bathroom, in the women’s bathroom.'

A middle school vice principal was caught on camera throwing a beer at a fellow restaurant patron after his wife went on a transphobic rant.

Michael Smurro tossed his beverage at a customer sitting in the outdoor dining area of Fred and Ethel’s Lantern Light Restaurant and Tavern, WCAU reports. Smurro is the vice principal of Neptune Middle School in Monmouth County, New Jersey,

Facebook user Peach CC, who preferred not to share her full name with the Daily Dot out of privacy concerns, recorded the altercation and uploaded it across three separate videos. In the first video, Smurro’s wife, Lisa, can be heard complaining about a transgender woman using the women’s restroom.

Lisa Smurro becomes irate when she notices Peach CC and her boyfriend filming and mocking her. She yells at Peach CC’s table, “A man just went in the woman’s bathroom and that’s not right.”

Smurro then approaches Peach CC’s table and says, “Is there anything else you want to say in your video? ‘Cause I’m right here,” to which Peach CC replies, “You’re being inappropriate. Take your hate elsewhere, please.”

Smurro then directs her complaints toward a server, telling her, “There’s a man pissing in the bathroom, in the women’s bathroom.” After Smurro repeatedly says, “She’s a man,” the employee goes to get her manager.

The vice principal approaches the camera and says, “Here you go, pal,” tossing his full beer at another patron who’s offscreen.

“Now you can come out. Come on,” Smurro says, waving his hands and trying to goad the other patrons into a fight.

An unidentified person shouts, “Get the fuck out of here, you homophobic piece of shit!” as the couple walks toward the parking lot. “That’s assault.”

Smurro apologized for tossing his beer in a Tuesday email to the Associated Press.

“I allowed my emotions to get in the way of my normally sound judgement and reacted in a way that was inappropriate,” he wrote. “I do not condone violence or discrimination of any kind and should have simply walked away. I apologize to the person I threw my beer at and wish I hadn’t done so. I apologize to anyone I offended.”

The Neptune Township School District addressed the incident in a statement on its website yesterday. “This event is troubling as its perception potentially threatens the social-emotional well-being and climate of belonging that our Neptune School District community represents,” the statement reads in part.

“Although we cannot comment on the details of confidential personnel matters, we can say the Board of Education and Administration are taking this matter seriously,” the statement continues.

Lisa Smurro, meanwhile, remained unrepentant in an interview with Breaking AC, who first reported the story. “We didn’t bother anyone,” she told the publication. “This all began because somebody was in a bathroom that they shouldn’t have been in.”

The video containing the actual beer toss has also gone viral on the r/PublicFreakout subreddit, collecting more than 54,000 upvotes. Commenters disparaged the Smurros, but they were mostly preoccupied with the unmistakable Jersey-ness of the whole ordeal.

With nearly 10,000 upvotes, the top comment from u/NJneer12 reads, “Anyone hear that natural Jersey ‘Getthefuckouttahere’?”