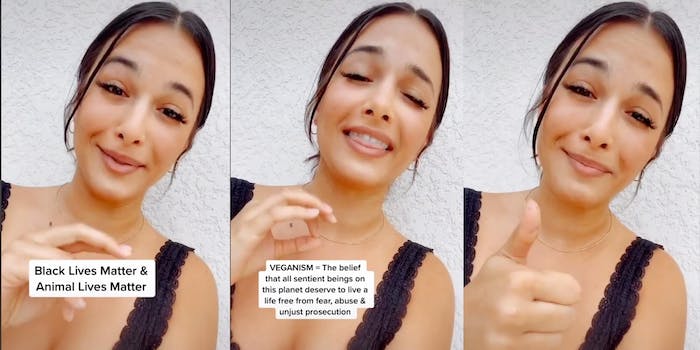 'I didn't quite string my words together the right way.'

A vegan TikToker is receiving backlash after saying in a video Tuesday that animal rights and Black Lives Matter are “all the same fight,” the Evening Standard reports.

“Literally all sentient beings on this planet deserve a life free from fear, free from abuse, free from unjust prosecution,” Perez said. “If it’s not their time to die, they don’t deserve to die. So stop killing Black people and stop killing animals.”

Perez posted the TikTok on Twitter and wrote that “the fight to end oppression for animals is the same fight to end the oppression of Black people.” The video has accumulated over 4.5 million views.

Twitter users criticized the content creator for comparing the Black Lives Matter movement with the fight for animal rights, and some called Perez racist.

One person tweeted that Perez found an argument worse than “all lives matter,” by saying that “all life matters.”

Another tweeted that people have been “talking about animals and Black people in the same breath for YEARS. It doesn’t help.”

Someone else tweeted that Perez’s sentiments are “beyond inhumane, insensitive and ignorant.” They said, “we are not animals we are human beings.”

Perez, who did not immediately respond to the Daily Dot’s request for comment, posted a video on Twitter Wednesday apologizing for the wording of her statements.

“I didn’t quite string my words together the right way or the way that I wanted, so I want to be clear on this statement: I am a vegan who is fighting for the end of oppression of all living beings on this planet,” Perez said. “I fully support the Black Lives Matter movement and any other movement that seeks to do the same.”