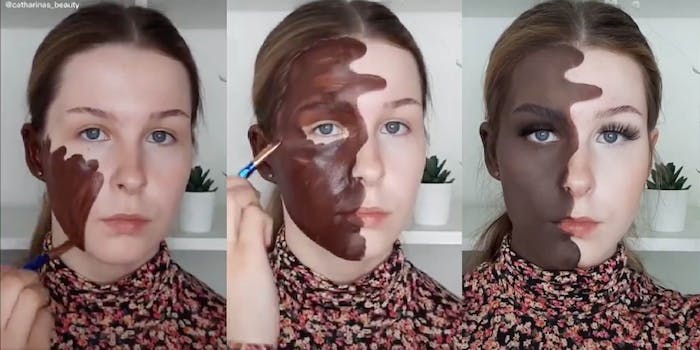 She says she received death threats.

An Austrian teen is facing backlash for putting blackface on half of her face in an effort to denounce racism and stand in solidarity with the Black Lives Matter movement.

While the TikTok video by @catharinas_beauty has since been deleted, it was viewed 1.1 million times, according to the New York Post.

“Thank you user catharinas_beauty, racism is no more!” one user wrote on Twitter, where the video was eventually reposted.

In the video, which lasts less than 30 seconds, the white 16-year-old puts brown makeup on. She uses Childish Gambino’s “This Is America” for the video’s sound. The 2018 song, as well as its accompanying music video, received recognition for its acute commentary on Black lives and gun violence in America. It is seeing a resurge in popularity—especially on TikTok—after the police killing of George Floyd and subsequent Black Lives Matter protests.

After receiving backlash, the teen apologized in another TikTok video on Monday. “I deleted the video & the picture and I hope you can forgive me. it was never meant to be,” she wrote in German.

She also posted an apology to Instagram using the same handle, @catharinas_beauty.

“I didnt meant it like that and you know that,” she wrote. “Im only a child, and you are adult, you have to know better. I didnt researched before i made this look, i should have done that i know.”

She said in her post that she received death threats, but the Daily Dot was not able to independently verify the claim.

People online responded to her apology by telling her to be “be cautious” and “do some research.”

“The best thing you can do now is educate yourself on the history behind black face, and learn about why it is so wrong,” one person commented. “Its good you acknowledged what you did, and apologized for it! I just hope you use this as a learning opportunity.”

Recently, a Filipino artist similarly came under fire for posting photos in blackface to show support for the Black Lives Matter protests going on around the world.