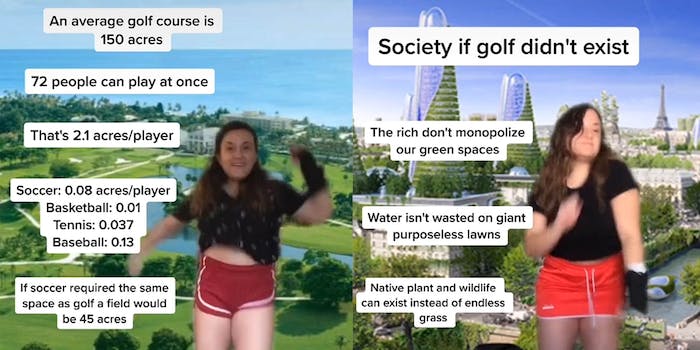 Meet the woman who is trying to cancel golf on TikTok

Beyond the political and environmental implications, golf 'is boring and the clothes are ugly.'

Abbie Richards was jogging when she discovered her single-issue platform. As she ran past a golf course surrounded by “no trespassing” signs, the campaign to cancel golf took shape.

Richards, 23, isn’t actually running for office—yet. But over the last month, she’s crafted an organic movement on TikTok to #cancelgolf. The hashtag has more than 3.7 million views, and in her videos Richards illustrates the environmental and social implications of golf courses, using humor and a few dance moves.

“The privatization of green spaces, especially during a pandemic when people need to maximize their distance from one another, made me furious,” Richards tells the Daily Dot of the genesis of #cancelgolf. She says her first anti-golf TikTok, where she announces her “platform,” did better than expected.

“So I kept researching,” she says. “And the more you learn about golf, the more you hate it. I see this happening with the TikTok users as well. The more I provide educational, well-researched videos about golf and its social, environmental, and political ramifications, the more they also start to hate golf.”

Richards grew up in Boston, and after graduating college with an environmental science degree, she moved to Melbourne, where she pursued standup comedy for the last two years before returning to the states. Aussie comic Hannah Gadsby has a bit about hating golf in her new special Douglas, and Richards points out George Carlin and Robin Williams have also tackled its inanity. Her TikToks get at why golf is easily mocked, as well as the racism and sexism built into the “sport.”

She also makes points about what all that green space could be used for, and the toxic chemicals and pesticides sprayed on courses. Then there’s the matter of President Trump’s multiple golf courses, and his visits on taxpayers’ dime. And, you know, golfing during a pandemic.

“Trump golfing as the COVID death rate hit 100,000 certainly didn’t hurt my argument,” Richards says. “Plus his golf course, Mar-a-Lago, is built on coastal wetlands, which are an essential ecosystem for combating climate change. Coastal wetlands are one of the most effective carbon sinks on the planet and their destruction releases incredible amounts of greenhouse gases into the atmosphere. Trump golfing at Mar-a-Lago is like a visual representation of our leaders not only failing to combat a grave issue facing our generation but then playing a game on top of their destruction.”

While Richards has responded to critics who feel the need to diminish her knowledge and body—she apparently has “one rich white kid who spends his entire days in my comments sections insulting and threatening me/my followers”—she says the movement is important.

“It’s an environmental issue but also a political issue, a social issue, a public health issue,” she says. “Also, quite frankly, golf is boring and the clothes are ugly.”

Though her more recent TikToks are focused on the protests, Richards is thinking even bigger about the #cancelgolf movement, especially if it reaches the right audience: “One day, if I work hard enough, maybe the president will slander me on Twitter!”