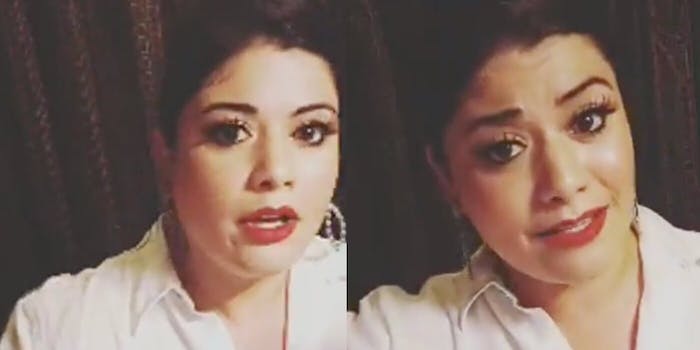 A Texas nurse-turned-politician who once went viral for sharing the story of her bullied son is now facing backlash for her anti-gay remarks.

In 2014, Vanessa Tijerina shared a photo of her then son, then 11, who she said was being relentlessly bullied and being called gay. In the photo, the boy was seen holding a poster that partially read, “I’M NOT GAY. STILL, I GET CALLED GAY AND FAGGOT AT MY SCHOOL EVERY DAY.”

The “school district is in a community that is a pro-bully, anti-victim community in EVERY aspect,”  Tijerina wrote in the description of the photo.

Ironically, she’s now being outed for homophobia. Commenting on her friend’s personal situation, Tijerina posted a Facebook Live video on Tuesday with a 30-minute rant where she shamed bisexual men, spread the myth of high prevalence of HIV/AIDS only among gay men, and said bisexual men are victimizing “single, straight, female” like herself.

1ST VIDEO REGARDING RGV MEN ON THE DOWN LOW ABOUT THEIR SEXUALITY & WHY THIS MATTERS TO RGV WOMEN & CHILDRENWANT THESE LASHES I'M WEARING??HERE:https://www.chrismichaelsvanity.com

In the video, Tijerina says a friend of hers recently found out that her partner is a bisexual man. She then claims women could get HIV/AIDS from their partners who are bisexual, regurgitating an old myth that ties the disease to the gay community.

“I don’t see straight females that are fastly increasing the diagnosis of AIDS,” Tijerina says in the video. “I don’t see that. But I do see the men on the down-low that are dating straight females and how those females are bearing children that have AIDS, why? Because they thought they were in a relationship with a straight man.”

She says she came to her conclusion based on her conversations with people who have “dealt with AIDS in a big way.”

HIV/AIDS has been found to affect gay and bisexual men at a disproportionately higher rate because of the discrimination they face for their sexual orientation. As the Human Rights Campaign reports, discrimination of different sorts—such as housing, employment, and/or medical—can often make gay and bisexual people more vulnerable to HIV/AIDS.

Tijerina misses this crucial nuance. She then goes on to say that as a cis, straight female, she’s the victim of bisexual men.

“I’m the very, very demographic that is being affected by this,” she says, laughing. “I’m single, I’m female, I’m straight. This message is for straight females who date males, and who are in relationships with them, that may not understand the risk that they take.”

She said she doesn’t care about the backlash as long as she “was able to decrease the damage” for even one woman through “raising awareness.”

“It doesn’t matter to me how many people are inappropriately offended,” she said.

Tijerina is no stranger to controversy. In 2016, she was arrested while she was a congressional candidate for the Green Party. She refused to give details on the reasons for her arrest and said it was “politically motivated.” She also told CBS in October of that year that the media was working with “the forces that want me to lose my election.”

According to records, Tijerina was indicted in July 2016 for a food stamp and Medicaid scam wherein she received thousands of dollars in excess for falsely claiming she was a single-parent household even though her child’s father was living with them and was an earning member of the family.

Tijerina did not respond to the Daily Dot’s request for comments.