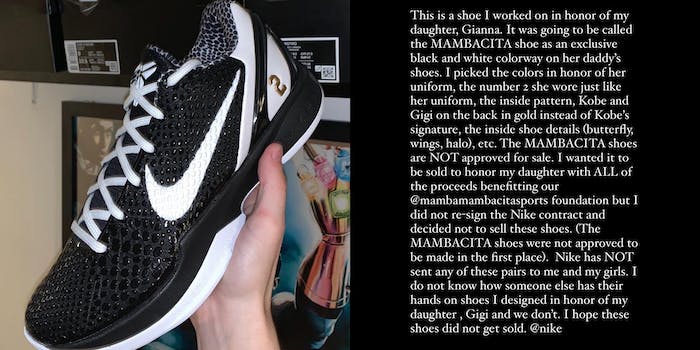 ‘I wanted it to be sold to honor my daughter’: Vanessa Bryant blasts Nike after seeing shoe she designed on sale

'The MAMBACITA shoes are NOT approved for sale.'

Vanessa Bryant blasted Nike on Instagram on Thursday and said that the company is selling a pair of sneakers that she designed for her deceased daughter, Gianna (“Gigi”) Byrant, without consent.

Bryant said that she designed the pair with her daughter in mind and was going to call it “MAMBACITA as an exclusive black and white colorway on her daddy’s shoes.”

On Instagram, Bryant said she picked each detail as a tribute to the 13-year-old who died in a plane crash with her father, basketball star Kobe Bryant, last January.

“I picked the colors in honor of her uniform, the number 2 she wore just like her uniform, the inside pattern, Kobe and Gigi on the back in gold instead of Kobe’s signature,” Vanessa Bryant wrote.

She said the pattern inside of the shoe had wings, butterflies, and a halo in Gigis’ honor.

“The MAMBACITA shoes are NOT approved for sale,” she wrote. “I wanted it to be sold to honor my daughter.”

She said even though she initially wanted the proceeds from the shoe sale to go to the Mamba & Mambacita Sports Foundation, which was started in honor of Kobe and Gigi Bryant, she eventually decided not to go ahead with the contract with Nike.

She also said that she did not receive the shoes from Nike.

“I do not know how someone else has their hands on shoes I designed in honor of my daughter, Gigi and we don’t,” she wrote.

The post overall stresses her frustration. Bryant said that she doesn’t know how the person holding the shoe in the photo got their hands on the shoes.

The post was widely shared on Twitter where one user asked why Bryant didn’t reach out to Nike directly.

“Since she worked with Nike so closely to design the shoe, why can’t she call and speak with them directly?” wrote the user. “Why is she handling this through INSTAGRAM??”

It’s not clear if Nike is selling the shoes. The Daily Dot has reached out to Nike and will update the report if the company responds.

Some fans suggested the design could’ve been leaked.

“These shoes were probably mass produced with anticipation with you resigning Kobe with Nike,” wrote one user on Instagram. “These pairs were probably stolen from a Nike warehouse and sold. It’s called back dooring. Happens ALL the time.”

Others expressed their sympathy in the comments.

“I am so sorry this happened to you and your family. You did design beautiful shoes,” wrote one user.

“Disrespect on many levels,” wrote another.