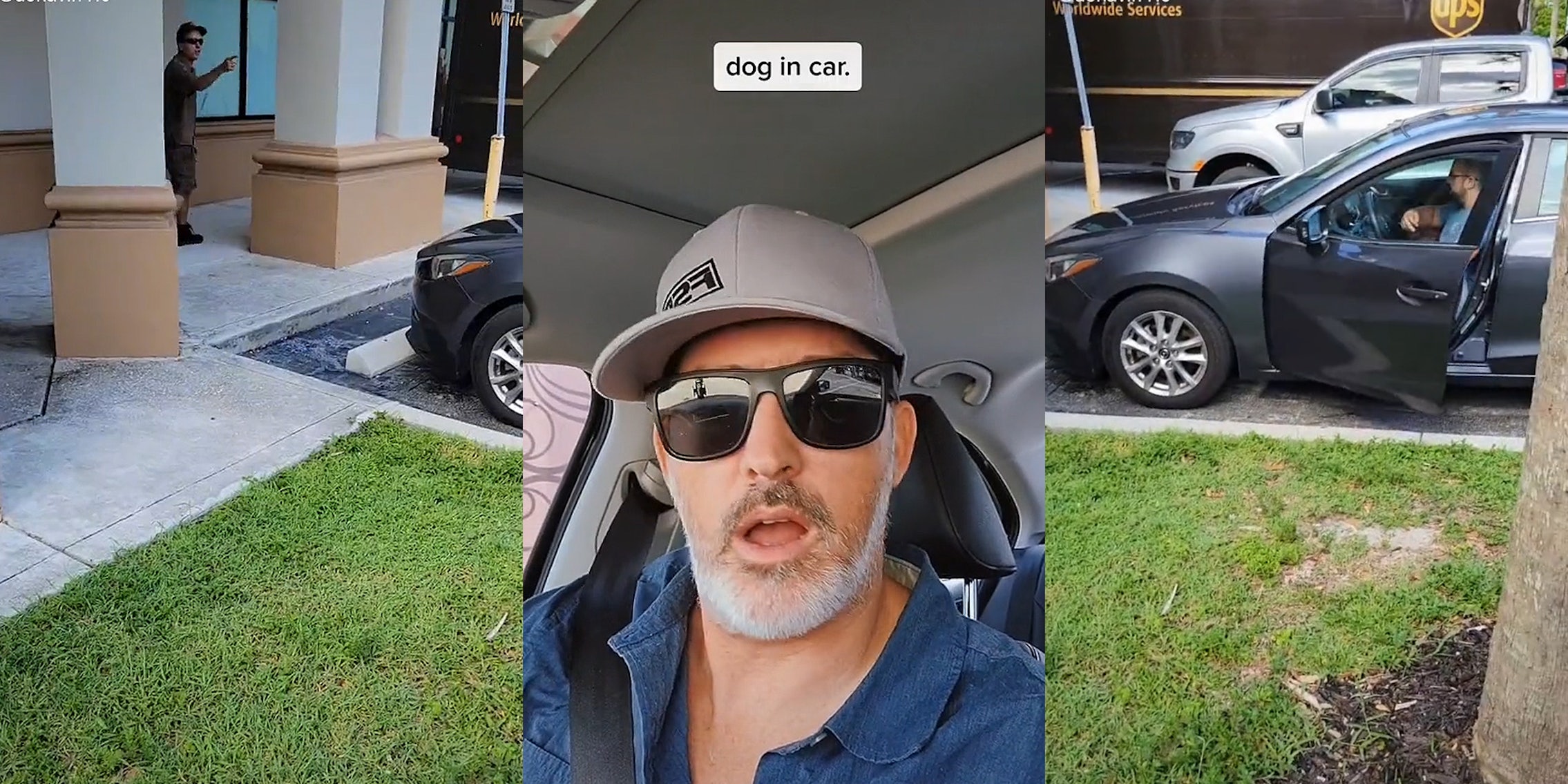 ‘If this is why it takes a little longer to get my packages I’m okay with it’: UPS driver calls out man for leaving his dog in his car

'You don’t deserve that dog.'

In a viral TikTok video, a UPS driver shouts at a man who left his dog in the car.

The video was posted by TikToker Donavin (@donavin410), who was stopping by the UPS store when he recorded the incident.

Donavin captioned the video, “ups driver upset that guy from #Kentucky left his dog in car with window rolled up for 20 minutes on a 93° degree day in #florida.”

The video shows a man walking out of the UPS store and entering a blue silver car, as a UPS driver shouts at him for allegedly leaving his dog in the car.

“Fuck you,” the man shouts before closing his car door.

“You don’t deserve that dog,” the UPS driver responds, while walking toward his truck. “That dog does not fucking need a shit owner like you, fucker. Shit ass owner.”

Donavin then turns the camera to face him. “He does have a point,” the TikToker adds. “In the state of Florida, we could bust that window.”

He references a 2021 Florida statute, which states that the “rescue of vulnerable person or domestic animal from a motor vehicle” leaves the rescuing party immune from civil liability for damage to a vehicle, given that law enforcement is also called prior to or shortly after the rescue.

The TikToker’s video received over 1.5 million views, and many commenters praised the UPS driver for standing up for the dog.

“UPS if this is why it takes a little longer to get my packages I’m okay with it,” one wrote.

“Yesss! That UPS driver was right,” a second wrote.

“Great guy standing up for the dog. bravo,” a third commented.

“I was heading to my PO box to pick up a package,” Donavin begins, “so I got out of my car at the UPS store and nothing was going on.”

After picking up his package, he says the UPS driver approached him and asked him to start recording.

“As I’m walking out, a very frustrated UPS man came up to me and said, ‘Hey! Can you document this? I’m pissed off. This guy is really making me mad.’ I’m like, ‘huh?’” Donavin continues. The UPS driver didn’t provide any further context, he says.

“As I’m walking towards the truck and the car, he says, ‘I can’t believe this fucker left his dog inside this car in the heat,’” the TikToker describes.

That’s when Donavin discovered the dog inside the car. He claims the car wasn’t running, there was no AC, and it was an older vehicle. He also alleges that the dog was trapped inside the car for around 20-25 minutes.

Donavin says he was about to attempt to open the car to get cool air inside when he heard the dog’s owner shout from behind, “Fuck you guys!”

The man attempted to lie, the TikToker says, claiming he was inside for only 12 minutes. That’s when Donavin began recording the incident. Donavin notes that neither he nor the UPS driver broke a window or called the cops.

The Daily Dot reached out to Donavin via TikTok comment.