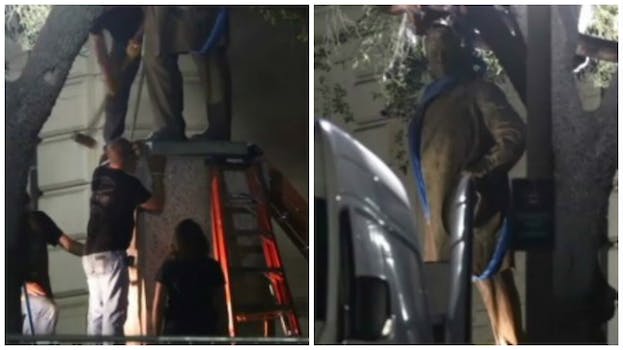 They have become 'symbols of modern white supremacy and neo-Nazism,' said the university president.

Days after protesters toppled a Confederate memorial in North Carolina and the city of Baltimore suddenly removed four Confederate monuments in the middle of the night, University of Texas workers, without warning, took down four of its own statues late Sunday into early Monday morning.

“Last week, the horrific displays of hatred at the University of Virginia and in Charlottesville shocked and saddened the nation,” Fenves wrote. “These events make it clear, now more than ever, that Confederate monuments have become symbols of modern white supremacy and neo-Nazism.

“We do not choose our history, but we choose what we honor and celebrate on our campus. As UT students return in the coming week, I look forward to welcoming them here for a new academic year with a recommitment to an open, positive and inclusive learning environment for all.”

Two years ago, Fenves—whose father was a Holocaust survivor—made the decision to remove a statue honoring Confederate President Jefferson Davis. That decision was met with mixed reactions from the student body and the alumni, and it led to an unsuccessful lawsuit brought against the school by the Sons of Confederate Veterans to halt Fenves’ decision.

Late Saturday night, a UT spokesman told the Texas Tribune that the school took down the statues in the middle of the night “for public safety and to minimize disruption to the community.”

Workers began pulling up to the statues around 11pm CT on Sunday night.

From the scene @UTAustin where crews have placed barricades around the South Mall before workers come to remove 4 Confederate statues. pic.twitter.com/fKK5bVgIKc

Crews have removed the statue of Hogg and are on the second statue now, expecting to work all night. pic.twitter.com/ssCtEiP5T7

Can't get very close but there's a Univ of Texas confederate stAtue coming down. pic.twitter.com/iXpNqkyNhA

Crews worked to remove statues of confederate figures last night on the UT Austin campus. School President Greg Fenves said in a letter that they needed to be removed because they "have become symbols of modern white supremacy and neo-Nazism."More here: kutne.ws/2x5gJHT

By about 2:30am on Monday morning, the statue of Johnston, the final monument, had been removed.

Unsurprisingly, not everybody was pleased with the removal of the monuments.

Some tense face to face arguing over removal of Texas confederate statues. pic.twitter.com/exgPbG5vli

Fenves, though, made his decision, based in part on the Charlottesville violence.

“The University of Texas at Austin is a public educational and research institution, first and foremost. The historical and cultural significance of the Confederate statues on our campus—and the connections that individuals have with them—are severely compromised by what they symbolize,” he wrote. “Erected during the period of Jim Crow laws and segregation, the statues represent the subjugation of African Americans. That remains true today for white supremacists who use them to symbolize hatred and bigotry.

“The University of Texas at Austin has a duty to preserve and study history. But our duty also compels us to acknowledge that those parts of our history that run counter to the university’s core values, the values of our state and the enduring values of our nation do not belong on pedestals in the heart of [campus].”