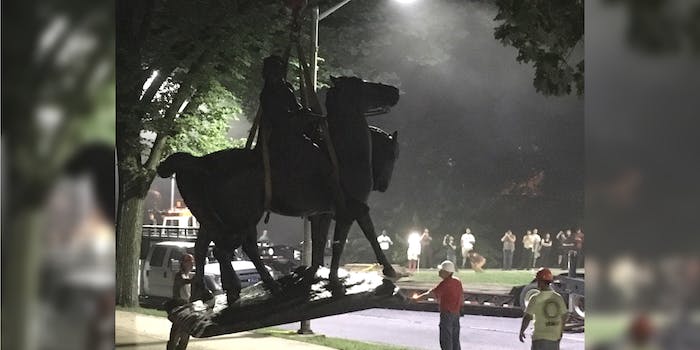 While you were sleeping, Baltimore quietly removed all its Confederate statues

'I did not want to endanger people in my own city,' said the mayor.

The Confederate statues in Baltimore are no more.

In a move to protect its citizens from the deadly violence exhibited in Charlottesville, Virginia, last weekend during a white supremacist rally, Baltimore hauled away all four of its Confederate statues in the dead of night. From 11:30pm Tuesday to 5:30am Wednesday, Baltimore Mayor Catherine Pugh oversaw the removal, which she ordered after the city council approved a plan to rid public spaces of the monuments on Monday.

“It’s done,” Pugh told the Baltimore Sun on Wednesday morning. “They needed to come down. My concern is for the safety and security of our people. We moved as quickly as we could.”

While the city is still in the process of deciding what will happen to the statues, Pugh’s decision to remove them quickly and quietly stemmed from this weekend’s white supremacist events in Charlottesville, during which a man who attended the protest against a Confederate statue’s removal drove into a crowd of counterprotesters, killing one and injuring 19.

On Tuesday, Baltimore activists had vowed to tear down one the statues if the city didn’t do so themselves.

On Twitter, those who were able to witness the mass removal shared photos of statues being lifted from their pedestals, hoisted onto trucks, and carted away.

For those just waking up, here's what happened in Baltimore: the city's dead-of-night removal of all four of its Confederate monuments. pic.twitter.com/gaquP2hlqN

Last night at 7pm vs this morning at 7am #baltimore #Bmore2Cville pic.twitter.com/N6h41ojf4l

Baltimore takes down its 4 Confederate monuments. All came down within hours overnight. #wtop pic.twitter.com/uoR6jioKkY

“I did not want to endanger people in my own city,” Pugh said. “I had begun discussions with contractors and so forth about how long it would take to remove them. I am a responsible person, so we moved as quickly as we could.”